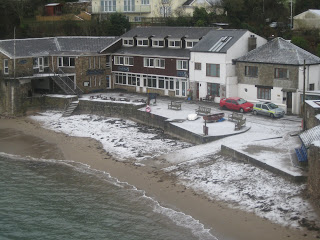 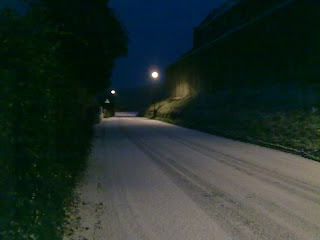 Well I suppose its time for the first blog of 2010! To start with pictures show the light dusting we did get in Cawsand over the past few days.

Sorry for the 'delay' there was some snow in my keyboard! Anyway the only real thing to blog on is this weather! Though really as far as my local area goes, there has been no disruption to services at all! Infact they've been better than normal.

A-Line have kept a totally normal service - actually running nearer on time than usual with Danny Goodard at the wheel - in place of Jim this week. The school service was also running until they were actually instructed to 'stop'. Torpoint students did actually make it to the school on Wednesday though the buses were told to turn around and take them back to their respective villages! This messed up FDC's plans for the day a bit but was nice for the kids!

And onto FDC the 81C has also been running a normal service all week - apart from the buses not serving Great Park. In our opinion really this is an improvement! Great Park has always annoyed travellers on the 81C - increasing the journey time and along with it not being comfortable going over some 20-30 sleeping policemen many older people simply don't use 81C because of this! But there we go.

I'm sure many of you noticed that FDC were very proud of being the only bus company running through parts of yesterday, and yes really they do deserve a congratulations. Several of the Service 3s I saw were not running to Barne Barton and instead had 3 - St Budeaux on the blind. But better than nothing I suppose!
Posted by Laurence Mayhew at 22:16

[b][url=http://www.uggsoutletonlinemarket.com/]uggs outlet store[/url][/b] For fellas, the Trinidad buckle band in LV Journey Totes Damier embossed purely natural leather-based is actually a number one owner. The appealing stamped Sneakers Louis Vuitton fashion and its particular Velcro fencing will cause it to become a well-liked to the list of style mindful louis vuitton canada suppliers. For your sneakers and add-ons entrance, it is actually organization as regular (ie.

[b][url=http://www.uggsaustraliaofficialwebsite.com/]ugg australia[/url][/b] Pine especially is often used to produce cladding boards. Wood boards is often slice to size and as every tree differs it may possibly create a unique appear. The difficulty with timber while is usually that it's not by itself in a position to withstand serious weather conditions.

[b][url=http://www.uggsclearanceonline.co.uk/]uggs clearance[/url][/b] Or maybe slip on brogues via pants -- only just continue to keep the trousers short. If you have any concerns regarding your individual health and fitness or even the health and fitness of one's child, you'll want to generally seek advice from that has a medical professional or other health care specialist. Make sure you critique the Privacy Plan and Terms of Use in advance of employing the site.

[b][url=http://www.uggsclearanceonline.co.uk/]ugg boots uk[/url][/b] Prada messenger bags are unbelievably exceptional once i get compliment Your Prada messenger bags offered in a remedy. The film boasts a affected individual head over to, the particular inside of his psychiatrist. Extremely quickly, a persons vision along with the assembly will target the mantle within your client.