Snap on Sunday - Turning back the clock 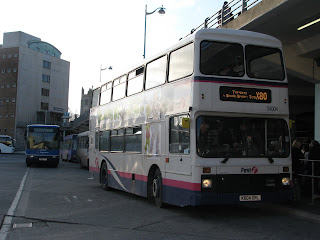 This shot taken yesterday was one very much of nostalgia. In the foreground we have K804 ORL - of course bought new for the X80 she has been placed across Devon and has not carried out the route to my knowledge for some time - and probably wouldn't have for a while longer. But driver Tony Body had be driving this bus just an hour or two earlier when the tyre became flat on the Torpoint Ferry! Somehow they dragged her off and she was sent upto the depot to have a new one put on. Infact it looked like they had simply taken them whole rim and tyre off and replaced it with a different one, the blue ofthe rim didn't match the rest! But anyway after this she wasn't put back on Torpoint services but was taken out on the X80! I think most people would agree this is much better than a Trident! (and more comfortable too with that DP seating). And in the background we have Stagecoach's P804 XTA working the X38 - again once forgotten but now they really are back and delivering a reliable service once again on the X38. This could easily have been taken 10 years ago! (Well ignoring the newer liverys that is!)
Posted by Laurence Mayhew at 16:45