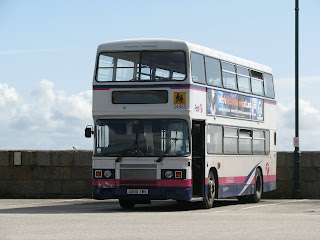 It seems to be the only thing I ever post about on this blog - but then again its always been what I'm most interested in is whats happening with the fleets of the South West.

And this time comes the turn of the G-TWSs. These started life with Badgerline in Bristol and worked many of the routes in the area for many years, into the First Group era. Some were then transferred to Southern National and were based in Taunton running various routes - including shuttles to Asda which a few of them were painted in. These then were brought down into Cornwall to help see off some of the older Olympians and Volvo Citybus'. But now this is the end for them and though its been fairly short lived, this is quite the end of an era.

The last ECWs in Cornwall will pass and yes technically they arn't a proper ECW the iconic shape will be lost. The Olympian has never looked better and really the K-LAEs that have mainly replaced them just arn't the same! Though the Cummins that these are fitted with are no where near as good as the old Gardners the buses just seem to make up for it in character and comfort! Indeed these buses are in my opinion about the most comfortable vehicles FDC operates!

So be quick getting your last pictures! G901 TWS is the last still surviving! I doubt many if any will make them out the other side of First Group either!
Posted by Laurence Mayhew at 22:22