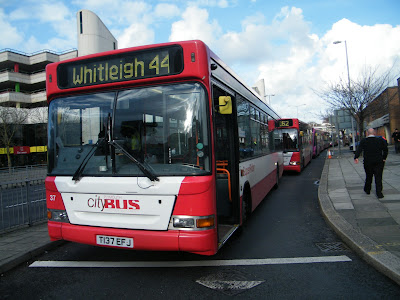 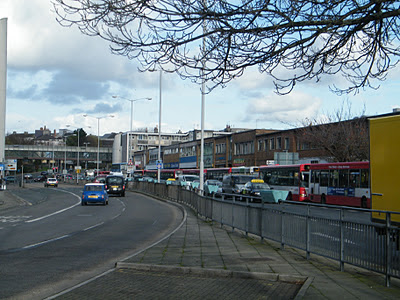 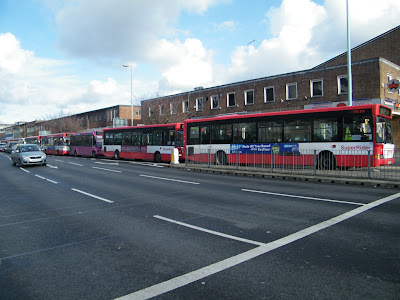 A few interesting photos taken by Tom Pearce today of the manic scene caused by the marches through the city centre today by public sector workers. As you can see buses queued right up Western Approach where at least 13 buses can be seen.
Posted by Laurence Mayhew at 22:13 1 comment:

Tamar Belle is back 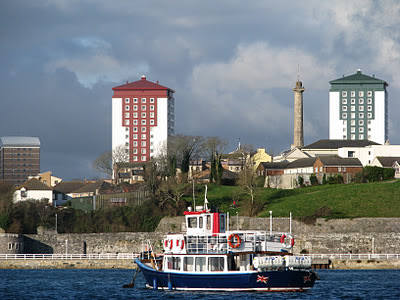 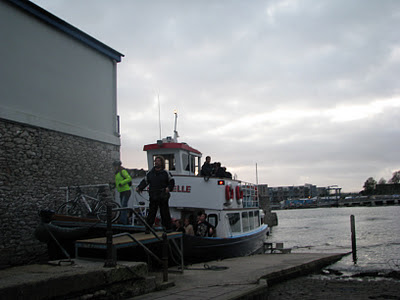 The Tamar Belle has returned to its duties operating the Cremyll Ferry for another winter season while the Northern Belle goes in for her annual refit. You will notice this year the Tamar Belle is no longer adorned with the Union Jack livery, but has now been put into the standard livery used on the Northern Belle. I hope to be able to bring you more details when the time is appropriate. With no heaters on the Tamar Belle, passengers will have to wrap up warm for the next few weeks, me included! I may just have to huddle around the engine for some heat! 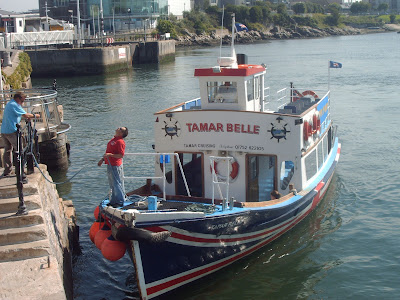 Tamar Belle is pictured here in the old Union Jack livery, to refresh your memory!
Posted by Laurence Mayhew at 21:12 No comments:

Well, the weather wasn't that brilliant yesterday for good quality photography, but here's a couple that were at least half decent from yesterday.

Firstly here we have Stagecoach South West Alexander bodied Dennis Dart S472 BWC. These older Darts are becoming increasingly rare with the recent influx of '60' and '11' plate Enviros which make up the mainstay of the fleet today. She is seen in Exeter Bus Station on the 56 to Exmouth, having arrived in from Exeter St Davids. 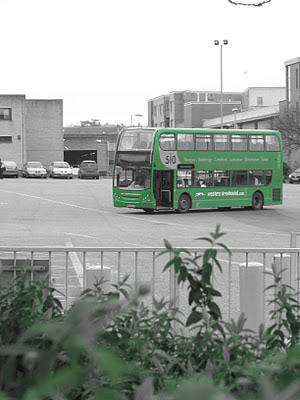 And here we see Western Greyhound's Dennis Enviro 400 WK58 EAC awaiting its next run on the 510 in the lower bus station. I took advantage of the limited greenery in the bus station to use the green filter on the camera to highly the bus and the plants!
Posted by Laurence Mayhew at 19:31 1 comment:

When things don't add up! 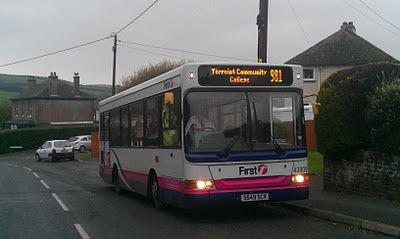 Today, First Devon and Cornwall were forced to use Dennis Dart MPD S549 SCV on the 981 Torpoint School run in place of the usual Dennis Trident! This of course naturally on its own creates problems, but it gets more silly when you consider what's been going on behind what's floating on the surface. 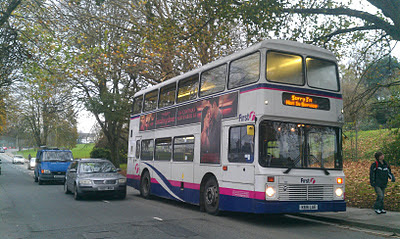 So, a Dennis Trident that was allocated that morning lost reverse gear, so 43809 was taken out of public service to take onto the school route. Why was there no spare bus? That's because Torpoint is currently 100% low floor! Torpoint is currently running 6 Tridents, and 3 Darts, leaving no spare buses available if something goes wrong. So where are the Volvos? K801 ORL has a major air leak being seen to at the moment. K804, is generally unreliable, so again is likely being seen to in Plymouth. But K803 I have no idea! She's disappeared for the time being. Makes you wonder why they got rid of K802 ORL when there seems still to have been work for her to do! So, Torpoint had an X80 Trident, so the X80 working usually a Trident was substitued by Leyland Olympian K616 LAE!


So to sum up, a Trident was at Torpoint that 'shouldn't' be, leaving X80 1 bus down meaning an Olympian had to be used, and a Trident broke down where a Trident should be so a Dart had to be used! Got that!?!
Posted by Laurence Mayhew at 15:14 1 comment: 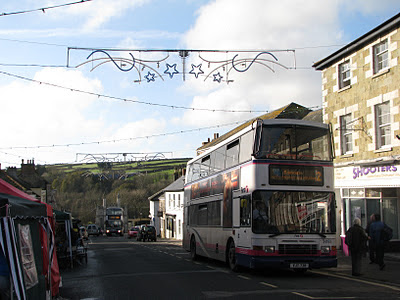 A photo today of Ex-Airbus Volvo Olympian A123, now 34193, VJT 738, in the First Devon and Cornwall fleet, along with Ex-Bristol S684 AAE bringing up the rear. This photo was taken in Helston on a market day, with Christmas decorations already up in the town, on a crisp November afternoon. These Volvos still are stunningly good buses, I'd go as far as saying my favorite buses FDC currently run. Just a shame they no longer use these on the X80! I defy anyone to say that they'd prefer a Trident. You can't even argue that there's no disabled facilities, these have wheelchair lifts!
Posted by Laurence Mayhew at 22:13 1 comment: 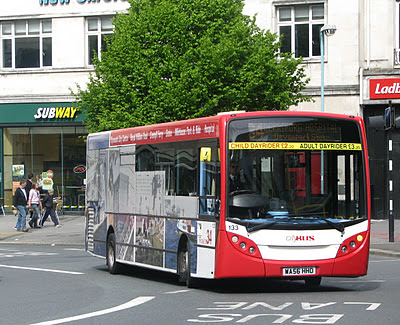 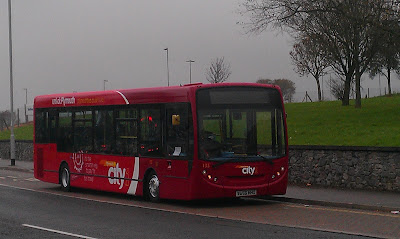 
Despite many people's opinions on the now redundant 'Route 34' livery, I really liked it! Wait, let me re-phrase that, I liked it when it was new! The livery really stood out, the pictures looked great on the sides and rear and it really did draw people's attention to the 34 as a whole. Unfortunately over time the livery faded quite rapidly, and soon was taken off to reveal the plain windows, leaving half a Northern Belle on the side, as well as various odds and ends of Plymouth buildings! The three 34 Enviros WA56 HHN/O/P are quite rare to see on the 34 these days, and have been for some time since the official contract ended for the Enviros on the 34, bought in conjunction with the Royal William Yard developments. Its much more common to see these 3 on 5s, 40s, 41s, 42s, 43As, 44s, and so on.


I must admit, I think this livery looks even better on the Enviro than it does on the Dart and B7s! The lines of the livery match perfectly with the move curvy body of the Enviro 200, and with the larger windows aiding in balancing the colour, this really does look fantastic, even on such a dull day as we have seen today in Plymouth. I may well have caught her on her very first trip out in the new livery, I saw her exiting the depot at around 1ish today, to take over a broken down Citaro on the 43 just outside the depot, so may well have been her first run since completed. On the topic of the Citaro, that's the bus I'm really looking forward to seeing this livery applied to, but who knows how long we may have to wait to see that!
Posted by Laurence Mayhew at 19:52 4 comments: 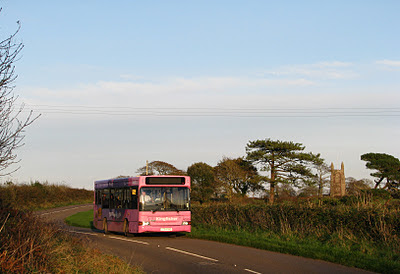 This week's Snap on Sunday comes from Maker Heights with a view across to Maker Church. The bus seen here is the only Dennis Dart to be liveried in Tamar Link branding S764 RNE, 40002, rolling  through the evening November sunlight. In fact, who would have thought it was November with a view like this! Simply stunning. I think this might actually have been better than the summer we had this year!

Totting up the Tridents! 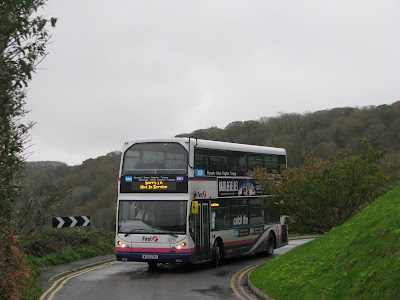 If you were to go down to Torpoint depot this morning, you might just have been 'lucky' enough to find 7 Tridents, instead of the normal 5! Unfortunately, Torpoint has gained another Trident, this one being 32761. She came over for operation for the first time yesterday, this being the first time the ferry lift will have been used on 32761. She joins 32762 which has been acting as the spare but at Torpoint for nearly 2 1/2 years now, and we presume that eventually all of the X80 Tridents will make it over to Torpoint to replace the aging K-ORL Olympians.


This is the first time that the incorrect route branding will have been used on Torpoint routes, 32761 carrying the new adverts for the X80/1. A 7 year track record of the correct livery isn't bad at all though! It is a shame that slowly and steadily the Olympian duties are dwindling, its quite frustrating when a Trident turns up in place of the usual Olympian on allocation! I'm not particularly looking forward to if/when these become full time members of the Torpoint fleet though! A fleet of VRs and 811s, replaced in 7ish years by Tridents and Darts! How dis-heartening!
Posted by Laurence Mayhew at 20:56 3 comments: 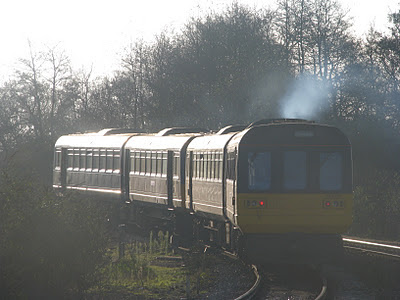 Love them or hate them, the Class 142 Pacer has become part of the scenery across branchlines in Devon once again, over the past 4 years. The 142s have been on loan from Northern Rail, and a short gap filler has turned into many years of successful running for the 142s in the South West.


There was public outcry, when the 142s first entered service again in 2007, prompting the local news stations to take a trip to experience the 'horror' themselves. The media mocked the bus style doors, seats and general layout, as well as the boneshaking ride. But these trains have something that a lot of modern trains don't hold, and that's bucket loads of character. The 142s are quite frankly, charming little trains. There's never a dull moment when you're onboard a 142. Something that many people seem to look straight past is the extra seating capacity on these with the 3+2 seating, which is very useful during the summer seasons, and on the popular school runs.


Final details are yet to be confirmed, but the scheduled run for the farewell tour, taking place on Sunday 27th November should be:

The train is expected to comprise of 142001, along with one but possibly 2 extra units providing the extra capacity if needs be. The track that they should be running on is quite rare, so could be the one and only time to experience some of these sections on a Class 142. The tour is expected to be around £30-35, but again, this isn't yet fully confirmed. I shall post more details as and when I receive them.
Posted by Laurence Mayhew at 20:37 No comments:

Public Transport of the Plymouth Area has entered a new era in technology. I will now be posting all updates on the blog to a page on Facebook, and PTOTPA has also gained a Twitter page. 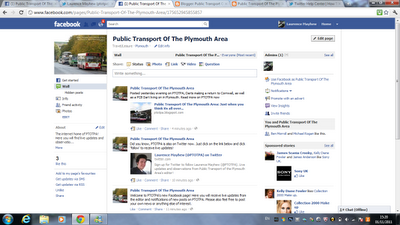 This means that you will now receive live notifications of new posts on this blog, as well as live updates and observations from myself out and about on my travels. This will enable me to post news that isn't always 'blogworthy', but will be of interest to you! These sites can also be used by yourself to post your own observations and news, as well as photos that you've taken out and about. I'll also let you know when I've uploaded new photos to the Flickr account, as well as new videos to youtube which will be of interest to you.

Or use these links below to find the sites:

ENJOY!
Posted by Laurence Mayhew at 15:22 No comments: