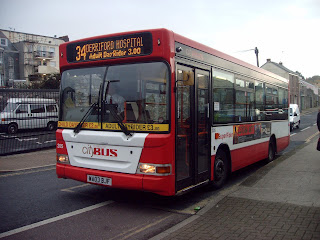 Dennis Dart MPD 205 saw a rare running on the 34 on Saturday. The MPDs are most often used on the 45. And while we are on teh subject on the 34 the 34B will from Tuesday be run by First Devon and Cornwall where Varios are thought to be used for all the new services that First have taken over with the retendering of the Plymouth Citybus routes.
Posted by Laurence Mayhew at 20:17 1 comment:

Northern back on service 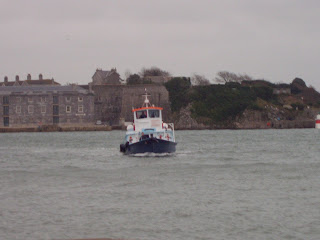 Northern Belle returned to service last week following this years refit. She was moored from Voyager for a few days to let the wood swell up before being put into open water as she does leak very badly. Nothing major has been done mostly a genral tidy up and repaint and a few replaced bits here and there. And what was good news to here was that they kept the original name "Armadilo" engraved on the stern so can now be seen. July will see her 82nd birthday.
Posted by Laurence Mayhew at 20:09 No comments: 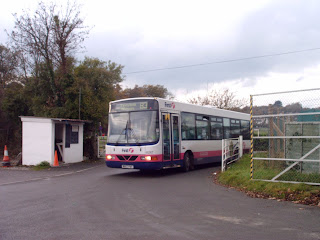 On Friday 21st a 49 year old cleaner at Tavistock bus depot was attacked by robbers. The incident happened at 23:30 when the robbers came into the depot and then started hitting him using an iron bar and shouting at him "Where are the keys and the safe?". And man was unable to for fill this as he did not have the keys to the safe. He was then tied up and was left while they broke into the cabin and office at the depot. The man suffered injuries feet and hands from the tying up and injuries to his stomach from the iron bar. The police are appealing for witnesses.
Posted by Laurence Mayhew at 17:46 No comments:

C417 HJN off on her travels again 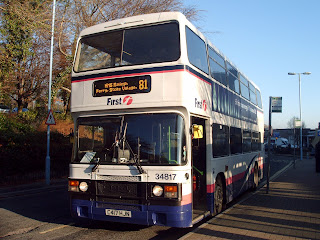 C417 HJN was off on her travels again on Thursday again. She was spotted opperating the Park and ride duties a couple of weeks back and again in Plymouth last week. On Thursday she was seen opperating the 5 to the Railway Station and the 6 to Elburton. And being I think I'm right in saying the only bus that was probably running in Plymouth with a gear stick she was not driven very well by the Plymouth drivers. She has now returned to Torpoint seen today running 81 and Cremyll school duties.
Posted by Laurence Mayhew at 20:34 No comments: 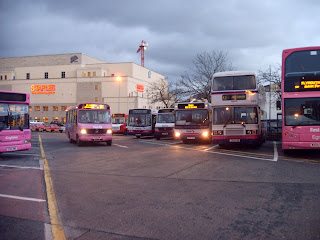 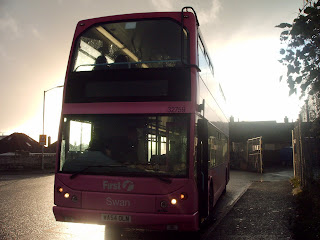 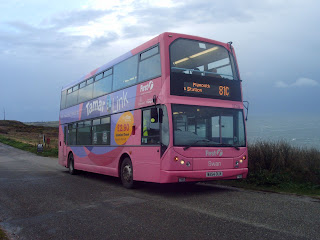 Well what was just an innocent 20 minutes shopping with Mum in the village to Millbrook turned out to be 7 hours onboard Derrick Cuff’s bus.

It started out at 13:19 in Millbrook where I was just getting the camera out to take a picture of the bus but he pulled away. So then we went to Cawsand to get a picture of the bus in Cawsand but who was driving but Derrick Cuff. So I flagged the 32759 down and jumped aboard the bus. “A Child first Day Plymouth Plus” I said to him. “Oh so you’ve been missing me then have you.” And well I had to reply yes. So I asked him where he’s been for his 3 weeks. And he replied that he’d been on his Honeymoon in Gambia. He said that he was hoping to see just a few old bangers or really rare buses but there was absolutely nothing. So we went off on the route talking about things. Then what cropped up (which also has its own article) was that the new Olympians that were coming to Torpoint to replace our Varios are now not going to come here and will be going to Callington which is a real shame because we were all looking forward to getting them but well can’t do anything about that. I just hope that doesn’t mean he will be returning back to Callington just so he can drive them but I know I would. STOP PRESS: This is not true they are still coming to Torpoint. So we went on to Torpoint where we waited there for 30 minutes while I had a look round the depot and Derrick was having a brake. It was then back on the bus this time on the 81 into Plymouth sadly the Dart was the bus that turned up. So I reluctantly boarded 40002 and we were off. Nothing much cropped up except his fascination with his phone. He was talking about all the different T.V programs that he watches when he’s on the ferry or running early etc. We got to Bretonside at 14:58 dead on time and went and parked the Dart up and I went to take a few pictures until going out on the 1523 81C. While there Gerald turned up with 34813. We had a chat with him and he asks Derrick “So how’s married life then” Then Nick turns up and says “You asked that yesterday” Gerald says “Well it can’t be very good because he hasn’t said anything about it” “And he’s on the half past one tonight. And we all laughed. Then Gerald starting going on about “So why do people like you do bus spotting?” So then Derrick started going on about “You know the other day I showed you those pictures of the depot back in the 60’s” “Well that’s why we do it to remember times like that” So then we left and went on all the way back to Cremyll where we met Chris who was on his ½ hour brake before the last ferry. Had a chat with him for a while and a play with the bus blinds until it was time to get going back to Cawsand. And on the way back who did we meet but Luke Farley. Who came on to go to go to Cawsand who started bringing up how much he like the bus we were on however much we hate it. Well a very good afternoon and all that for just £2.60. “Cheaper than you think with a First Day Ticket”
Posted by Laurence Mayhew at 19:37 No comments:

The train was developed in the early 70s as there would soon be high demand for a new faster locomotive. The train needed to be cheap, reliable, comfortable and fast. For this they came up with the prototype class 41. The train used the brand new Paxman Valenta engine able to develop 2,250 hp. The train used all the latest technology and was aero dynamically shaped and could be driven at both ends to make shunting easier. The two prototypes emerged as 41001 and 41002. The ends did trials on the Eastern Region and Western region lines but the trains were withdrawn shortly after. But they put in a bid for a similar design which would run on all the high speed lines in the UK. So then after the Class 43 Intercity 125 was born. The trains were built from 1976 to 1982 numbered 43002-43198. Maximum speed before the train was 100mph. But because of the 125’s rapid acceleration and deceleration this was therefore increased to 125mph. This slashed journey times across the country and a top speed of 148mph means that the train still holds the record today. The southwest got the third batch of trains.
The trains were set out in a 2+8 format. 2 being the power cars and 8 the carriages. First Great Western was by far the largest buyer of the train with 117 operating last November. During the early 90s most of the fleet received newer versions of the Paxman engine in a bid to reduce emissions and fuel costs for the trains though the engine proved fairly unreliable and did not prove to be much more efficient that the older engine therefore this project was scrapped. And so the date of December 1st 2007 came round on the calendar. This would mark the day of the last ever running of the Paxman Valenta engined Class 43 Intercity 125 31 years on from when they first started. Many many enthusiasts came to witness the final running of them. The train many us have grown up with would have a set farewell tour of the Western Region railway.

At 0640, renumbered 253001 which was the prototype number 43002 and 43003 departed Exeter for London Paddington. At 1005 she would become the London Paddington to Exeter. Then onto the 1300 to depart Exeter for the last time to Paddington. Then after the 1600 Paddington to Bristol. She then left Bristol for the last time at 1830 to head back up to Paddington. And then for her last time she left Paddington for Swansea. She came into Swansea dead on time. There after final tributes were made to the most successful HST ever made now to be replaced by the horrible sounding MTU which by I would say all enthusiasts views not even a shadow on the Valenta. And so we leave the station to where they first set off 31 years ago. Will it ever be the same again? The triumph of 20th Centaury engineering comes to a close. The Paxman Valenta. Serving us from 1976-2007. R.I.P
Posted by Laurence Mayhew at 19:21 No comments: