What we all feared? 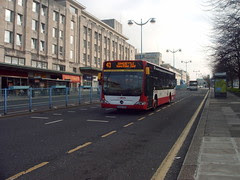 14.2.08 050
Originally uploaded by bristolvrboy
Well again thanks to an anonymous contributor I can tell you that he/she has heard confirmation that some Mercedes Citaros will be departing the city to be replaced by some more Ex-Oxford rejects. This really is what we all feared as the transfer to one of the 'Big Five' happened. Service cuts. The possibility of lower class vehicles with what may turn out to be a higher average age profile across the fleet. Fare increases have also occurred generally. True we have yet to see the real benefits they may be able to bring in for the long term but so far the South West is being demoted yet again.


Though we could say from a totally different perspective that this could be quite interesting. First of course still run against PCB on the two main routes that use Citaros, the 21 and the 43. If these were to go then would the type of bus really influence change from PCB to First? You could also say for the spotter it will bring more variety, with increased fleet movement and changes. Of course PCB have the increased power to fight back with First but we haven't really seen any of this in practise yet. Plympton was already pretty much tied up by PCB it was simply a streamlining exercise. Another thing that I'm sure we will see increasingly in Plymouth under Go-Ahead management.
Posted by Laurence Mayhew at 23:45

Is it really a surprise? I gather that Citybus never liked the Citaros as they are so thirsty.

The news that some of PCB's Citaros maybe about to be transferred elsewhere is certainly not good. Maybe this is starting to make us feel uncomfortable about the sale of the company to GoAhead in December last year? My comment is that I feel that PCB was becoming very vulnerable, particularly as First D&C seemed to have set their sights on bankrupting the company and hence their expansion of the UGobus network. With it being in Council ownership I suspect that Plymouth City Council would not have had the will or the resources to fight back and that in itself had the potential to cause serious problems for PCB. The recent service changes within PCB do appear to have been unpopular with some customers. I suspect any transfer of modern vehicles for older "cast offs" will also prove to be very unpopular. £20 million for a few Citaros seems a high price to pay! Hopefully with the continuing competition from First D&C there are only so many cutbacks that can be made before they risk starting to lose their customers to First.

True the Citaros are very thirsty but I would say it was a good compromise for the extra quality you get with the Citaro. Undoubtedly my favourite modern single decker.

I absolutely agree with you, it was going to happen and just 6 months on we are seeing the effects already. Go Ahead - PCB may now have the power to fight back against Ugobus - but so far I have seen no real development in the heated battle. If anything with moves like these going on First are in an even better position than ever. Though with Marc Reddy gone we shall have to see what the new MD will do to advance on Citybus in the coming months.

During the summer of last year there were some discussions taking place on other sites. These were about the effect on the First Ugobus network in Plymouth of the sale of PCB. Many people seemed to think that if Stagecoach had purchased PCB there would have been an out and out bus war, with there being no room for 2 operators in Plymouth. It does appear that Go-Ahead seem more happy to operate alongside First. I am more familiar with the Plymouth "Eastern" corridor of services through Plymstock. Here First withdrew their no 5 service a couple of years back. Also they virtually halved the 48 Wembury service. PCB introduced their no's 5 and 5A service (in all honesty it appears to have been in retaliation for the First Ugobus expansion elsewhere). After this all First D&C seemed to do is reintroduce evening services on their no 6 which they had withdrawn some months earlier. I see that from 25th of this month First are withdrawing the no 6 evening services once again. I suspect unless things "hot up" again both companies will compete with each other for the profitable business on the core routes within Plymouth and the casualty on both sides will be the less/non profitable early morning and evening services, services that First D&C seem never having been keen on running. We only have to look to areas such as Wembury and Cornwall to witness that!

If we do get any rejects from Oxford they will be from the following:-

This is from the enthusiast page on the Oxford bus site

Are they reslly that thirsty?
Last year the citaros had an avarage of 6.9mpg but the enviros and the slf's were only just over 8mpg.
Not much difference for a far superior bus.

What a difference 9 months can make. There appears to be a rumour going around that First maybe about to give up on Plymouth and may even be considering putting FDC up for sale!