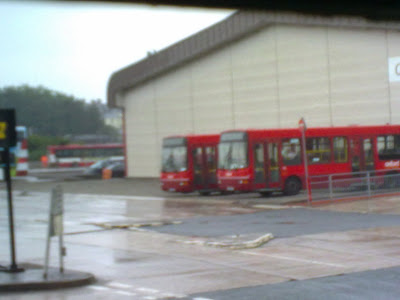 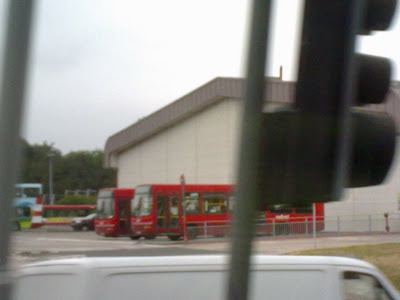 Here we go then, some more 'investment' in the Plymouth Citybus - Go Ahead fleet. Though as you may suspect they aren't exactly 'new' like they would have been under council ownership. Go Ahead have just brought down two Volvo B6s from Oxford - of course another branch of the Go Ahead empire. Unfortunately and quite obviously I can't tell you the registration from the pictures - I know they're shocking but its the best I could do at speed with a phone! No doubt these are here to start to decrease the number of Step Darts in operation. K107 SFJ though still seems to be going strong, though I have seen less and less of the current 'Step' Volvo B6s that Citybus currently run. Of course I non standard type at the moment to PCB but plenty of parts can surely be sourced from other parts of the network.


As a footnote this is also PTOTPA's 500th post since I first started on March 16th 2007. I would love to delve into the archives to find a more fitting story for today but with the computer still out of action this hasn't been possible.


So I shall leave you with the thought of step Darts finally being phased from PCB after so many successful years. Plymouth just won't be the same without them. Though I'm sure the same was said with the Atlantean years ago!


CORRECTION:
Thanks to an anonymous contributor it has been found that these are actually two Wright bodied Dennis Darts. They are from a batch of 10 that Oxford currently run. The three that have been disposed of for further use at PCB are R401/2/8 FFC. This is due to an influx of new vehicles in Oxford! I think all of us saw this sort of investment coming!
Posted by Laurence Mayhew at 23:58

Could be any 2 from the following:-

According to the enthusiasts update published on the Oxford Bus Company website, they're Dennis Darts, registered:
R401/402/408 FFC

I've had confirmation that will suprise most people, as a way to cut overheads, PCB will infact be transfering a number of the Merc Citaro's to Oxford and replaced with the type you've stated plus these, the Citaro's only do 8miles to the gallon and thus to expensive, whats Citybus coming to?

The fleet numbers for the R-FFC darts are:

Found this out reading something in their store room today which waiting to collect some boxes.