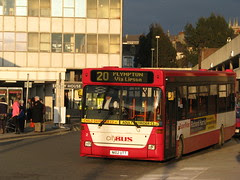 13th March 2010 138
Originally uploaded by bristolvrboy
Well thank you all for your continued contributions about the effects of Go-Ahead to PCB. This has really made the blog feel that bit more active so thank you!

I was also considering what one of the contributors commented on about the differences Stagecoach may have made. Its now pretty obvious that so far PCB will receive little direct investment from Go-Ahead. This has already been seen with further 'reject' buses entering PCB and the possible move of the newer buses to the 'better' parts of the business. Could the story have been different with Stagecoach at the helm?

Well lets consider this. Though Exeter has been under Stagecoach ownership for some time now it has seen continued investment in the fleet throughout. Lets take Trident to Enviro for example. Tridents were very much the mainstay of the fleet and gave much of the area low floor access fairly early on. Fair enough some older Volvo Olympians are still used but compare this to FDC, step entrance vehicles are still widely used on a variety of tasks with little investment. I suppose Plymouth is a slightly different story thanks to Mark Reddy, but the rest of Cornwall has never really seen many benefits to the fleet. Back to the point though, even many of the Tridents are starting to be replaced with Enviro 400s. This aren't just some old reject from another part of Stagecoach though. Many are either new or only a couple of years old. They are always smartly turned out and kept to a uniformed high standard across the range. Continued investment in the Park and Ride has seen Enviro 300s replace Solos and Darts on these routes and seem to have made a positive impact. It is rumoured that First may have lost out for the renewal of the Park and Ride tender if Plymouth, but we'll have to wait and see on this one.

So in summary could Stagecoach have not only given more investment in terms of the fleet, but also brought with it better timetabling, something that is still complained about. Of course route changes are inevitable under any new company so I wouldn't have though Stagecoach would have left it all how it was. But neither do I think it would be a First situation, where everything is cut back and your left with the core high profit services.

Another issue that came up is the economy of running Citaros compared to Darts. Citaros generally do 4-5mpg when in service in Plymouth specifically. The Dart returns 10-11mpg on Plymouth routes, and with a higher capacity, true this makes a lot of operational sense to change to Darts. Of course this isn't as good for the customer, the Citaros, as I have mentioned are by far my favourite modern single decker. The real question is what will they do with the Citaros. Oxford runs many, so I would guess they'll be sent up there. But why do they need them is the question? Oxford is now running some joint services with Stagecoach on the core routes offering a better frequency but with less work for each company, and a better result for the customer with interchangeable ticketing. This should mean they need less buses, but in practise this doesn't seem to be the case.

Tridents seem a bit of a strange choice if this is going to happen. Though PCB widely use Dennis, the Trident has never made it into the PCB fleet. Of course recently they bought the Volvo B7Ls from London General (another Go-Ahead branch). Why not just sent a few more down and standardise on them.

The same can be said for the Volvos. Of course there are the 3 older B6s with PCB - but again they have never been standard vehicles. Is this just some interesting variety for us, or will it prove to be more costly for the PCB user?

Many questions to ask, just months into the sale of PCB!
Posted by Laurence Mayhew at 00:10

Well the B10BLES are all of to GNE, and the Tridents are used on the P&R and Brookes Bus in Oxford.

citaros are supposed to be staying in plymouth the only rason reject busses are coming to plymouth is ensure that the whole pcb fleet is low floor. this is supposed to be by the end of this year

Fair point I don't dispute the reason for it. They do promise that the older Darts will be gone by the end of the year. But Stagecoach often would take a different mindset by buying new or near new to replace the older buses rather than entering a vicious circle of ageing replacing old which is commonly what is found in the South West.

yes true but its quicker to get older unused vehicles from other depots and much more cost effective, and in time these i suppose will be replaced with newer cast offs or brand new, good business sense but not so good for us drivers especially with twin door vehicles

yes true but its quicker to get older unused vehicles from other depots and much more cost effective, and in time these i suppose will be replaced with newer cast offs or brand new, good business sense but not so good for us drivers especially with twin door vehicles