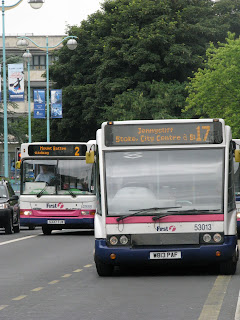 No time like the present lets have a go at covering a more major story. Indeed I've always been a bit wary as to getting my facts right with a post at this sort of caliber and that's why I usually simply stray away from this sort of story. But well all I can say he "Here we go!"
As I mentioned earlier in the week, it has been announced that First Devon and Cornwall Managing Director Marc Reddy will be slotted into the top role at First Hampshire and Dorset to replace current MD, Richard Soper who will be moved to a post at First Manchester. Reddy has no doubt been picked for how he has turned around FDC and now the company makes quite an impression the counties with many more high quality routes and buses now operating. Of course there has been some 'loss' due to the fact that FDC have now withdrawn many of their more 'local' non core services. Smaller operators have been able to take this over though and really at this level can do a better job than FDC would be able to do anyway so as a whole has benefited the whole community.
As many of you will know Reddy actually lives in Bournemouth and will now be based there, but will still be under control of all services right down as far as Lands End! I have seen no new appointments to FDC though have heard that Philip Pannel - currently engineering manager at FDC will be joining Reddy up in Bournemouth, with the possibilities of Simon Newport also joining Reddy. Reddy - as you may know used to work at FHD so another tick in the box for his local knowledge and previous experiences in the regions.
But not only will Reddy take over the core First services, he will also take up the relively new 'Greyhound' coach services running from Southampton upto London, of course now in Reddy's sector. This no doubt will be another new challenge and will have to be heavily concentrated on when it comes to the Olympics in two years time. Many people will of course be coming down from London for the sailing events.
As to buses I can only make my guesses. I would doubt First will want any high floor vehicles running in the area come the Olympics. Though Weymouth does have a good majority of low floor vehicles there are of course my beloved X and C reg Leylands along with the H reg Olympians and the P reg Volvo Olympians. And of course who can forget the sole remaining Bristol VR in First Group. It is still yet to be seen whether the VR will make it into 2010. One Open Top Volvo Olympian ran alongside the VR last year so it will simply be a case of wait and see as to what happens! There must be someone up at FHD who's 'into' older buses with such a diverse and interesting fleet still running even in these corporate times.
So there we go my first bash at something a bit more 'high class'!
Posted by Laurence Mayhew at 20:48

AIUI Marc has ben involved with Greyhound from the very start as it's all managed from Plymouth.