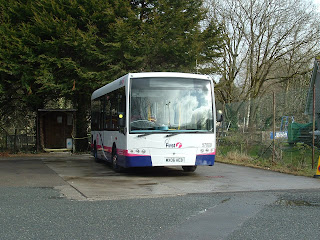 I know I know this bus and JHU seem to be the only thing I'm reporting on at the moment and well thats quite true, but then again I've been reporting on the movements of K802 ORL for 5 years now, this just seems to be more frequent fluttering around!
57000 was being used in Barnstaple for a short time when it was reported missing from Tavistock. Though with thanks to another spotter she is back in Tavistock yet again, and has even been used on services to Plymouth today after failure of one of the B6s! I can also update you on what the bus will actually be used on. Ignore what I said about it being used on 89s which is the town service but will actually be used on the 87 to Bere Alston/Ferres! Now I think I've got my facts straight :-)
Posted by Laurence Mayhew at 19:48

57000 was used on monday as the coach 20108 suffered alternator failure in the middle of a school contract, she was used to finish the school run and was then swapped for a B6 for the run on th X9 to Exeter as 57000 only has a top speed of 50 so she wouldn't be much use on the A30.

All drivers are being type trained this week on her and we are hoping to have her on the 89's from next week full time.