Today I took a trip down to Newquay with the purpose of taking some final pictures the Tolcarne Road depot before it closes early next year. I was hoping for a vibrent, working depot but what greeted me was simply a bit of tarmac and a fuel pump without any buses in it! So this was a bit of a wasted journey, but the trip itself was a far different story.

First leg of the journey was today not with the usual Dennis Trident, but in the much more capable hands of K801 ORL with Top Torpoint Driver Tony Body. This was a nice relaxing start to the morning with K801 performing well along the cliffs. 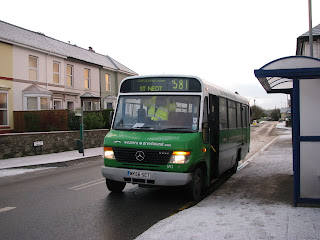 On reaching Antony I disembarked and unfortunately had a pretty cold wait for the 581 bound for Liskeard! Western Greyhound Mercedes Vario WK56 SET greeted me with heaters a blaze. This was a very plesent trip towards Liskeard, the gritting lorry had just been along the road so conditions were fine for the entire length of the journey. Pictures shows her at the terminus in Liskeard with a light dusting of snow underfoot. 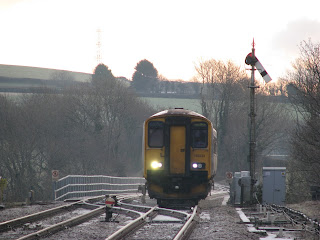 The treak down towards the platform at Liskeard was quite scary with the pathways iced over and the slope being quite steep. But pacing down slowly I made it down to Platform 1 for the 0851 to Penzance. It seemed even colder now than it was for the wait for the Vario but soon 150233 approached the station. Again the trip went perfectly down to St Austell where I disembarked and got straight on to a 527 to Newquay with another Vario. 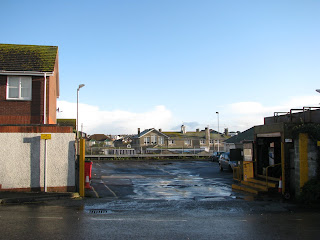 On reaching Newquay I then went upto the depot as previously said to find nothing but this view above. 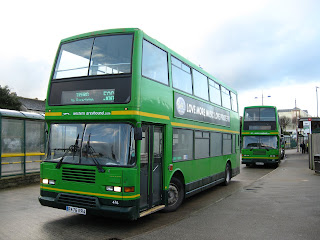 But not to worry a pasty was had and then it was off on the 90 to Truro with Ex Airbus Olympian 34196. Its quite amazing how much the batch vary in condition, but I think it safe to say that 196 was the best I've been on. A quick change at Truro to an Ex London Dennis Trident (to be honest I didn't bother taking a picture to remember what it was!) for the journey back to Newquay. 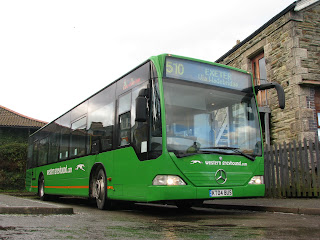 Half an hour wait at Newquay then saw me board the 597 with Ex Nottingham Volvo Olympian S453 ATV for the run upto St Columb Major. The driver was then instructed to continue the journey with KT04 BUS, the Mercedes Citaro! This was a fantastic run all the way upto Launceston. The Citaros really are such a pleasurable vehicle to ride on and I was if I'm honest surprised how well this effectively 'Citybus' coped with the terrain of the Cornish Countryside. People are still having a good look as the Citaro sweeps past, this one definitely stands out from the crowd! 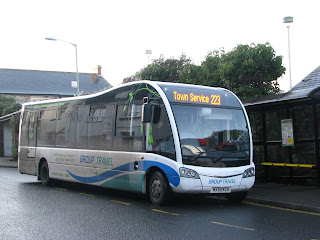 At Launceston it was a 20min wait for the 576 back to Plymouth though before this turned up, Group Travel's Optare Solo SR came through. This was quite a shock to see something as modern as this in the town, again a bus that definitely stands out! After this a brand new 59 reg Solo whisked me back to Plymouth. Western Greyhounds larger Solos are fitted with a Cummins engine rather than the more common Mercedes engine and I must say this really makes all the difference! The Solo absolutely flew along the road. The interior of these are also very comfortable, much better than a leather seat any day!

It was then a hop across the road to catch 32758 with Top Torpoint Driver Mike, back to Cawsand.