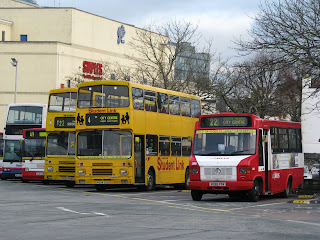 Its funny to think that all the vehicles in this shot (excluding the Trident) could be gone within the next year or two under Go-Ahead power. The 709s will likely be the first to be replaced under the new ownership, pretty much marking the end of the Mercedes Minibus reign. This of course excludes Target Travel's 2 709s though the rest of them have been replaced with Solos. As for the Volvos these may be retained for school work, but it wouldn't take many more newer deckers to see these go as well. Again this will see the end of this type being used in the area. FDC's closed tops have now been withdrawn, but of course there will still be many of them in the open top form working in Cornwall and from next year in Devon as well. And as for the Darts with steps again these will be replaced in the near future. I must say I do prefer the older Darts to the newer ones. That Cummins always sounds a bit more throaty in them - if you can call it that compared to a Bristol SU!
Posted by Laurence Mayhew at 19:43