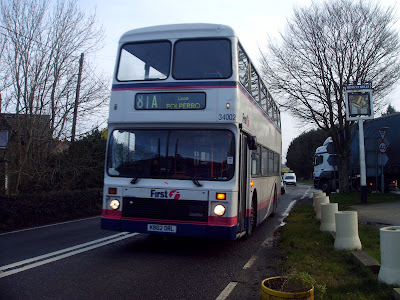 Sad news to confirm today after K802 ORL has been confirmed withdrawn and awaiting disposal.


K802 was Torpoint's very first Olympian which joined the fleet way back while Bristol VRs were still in operation in Torpoint in 2005. K802 was brought in even before the C-HJN Leyland Olympians and has stayed with the depot throughout the 5 years, with the odd spell in Plymouth and other surrounding depots.


But of course K802 was initially bought to run the X80 and indeed the bus was ideally suited for the job. In fact K804 ORL was spotted by myself operating the route just last week in which I will post the photo in the coming days. K802 is the only one of the batch that still retains her original Western National seat moquette where the other 3 have had the First Group moquette fitted.


Indeed in this photo alone a lot of history lies. She is seen here in Antony operating the old 81A to Polperro. This is now of course the Sundays only 81B with slight route variations on the old 81A. The driver on this trip I took was James, who was a trainee at the time, but can still be seen driving the 81 today. His trainer for the day was Alan Painter who has now moved into another job after being depot manager for some years. K802 still retains her roller blind in this photo which was later swapped for an electronic blind. The light surrounds have changed with the black surrounds not yet attached in this photo. K802 was included in the blog's very first month of operation with this photo included. The list carries on.


I was so disappointed the first day K802 ORL came round the corner on my 07:42 81B trip to Cremyll in place of my beloved VR. In my fledgling years as a bus spotter K802 has guided my way, a real part of my generation being lost. K802 is just a few months older than myself and just thinking of all the happy punters that have ridden on her over my lifetime is really quite heart warming.

I do hope someone will get around to preserving one of the K-ORLs. These were the pride of the fleet when new, and so appeared on all kinds of WN publicity for a number of years.

It seems that K801 ORL has indeed been secured for preservation when the time comes - is a very significant bus, as the first Volvo Olympian to be completed.

Now that is great to hear! As you say its not only of local importance, or even national importance, that bus is internationally important being the first ever Volvo Olympian. Personally I've always felt K803 is mechanically a better bus, but there's no doubt really that K801 is the one that deserves to be preserved.

Agree with you initially about it having been very disappointing when it first appeared as it was working alongside VRs, this meant it was avoided a lot of the time!
The one better memory of it for me, long after the end of VRs of course, was a trip to Bude on the X8 (or 76 depending on what year it was) with my dad at the wheel.
Obviously important from a long term preservation view that at least one is preserved.

How true Shaun! As a result I have very few photos of any of the K-ORL batch. As with everything, you never realise what you've got until its gone! I fear I may have left it to late to get any really decent shots of the K-ORLs. True that there is nothing yet allocated to replace them but it can only be a matter of time until they do disappear.

Indeed I did used to avoid them at all costs, especially when K802 turned up in place of one of the C-HJNs. But now it seems quite a godsend to receive a K-ORL. Only yesterday I was quite honestly thrilled to have a trip on K801 ORL home yesterday, in place of the normal Dennis Trident!