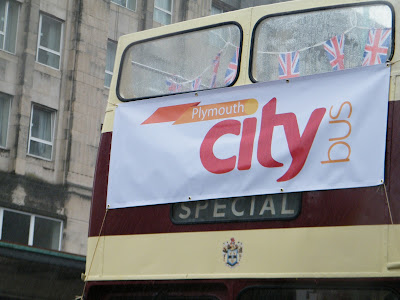 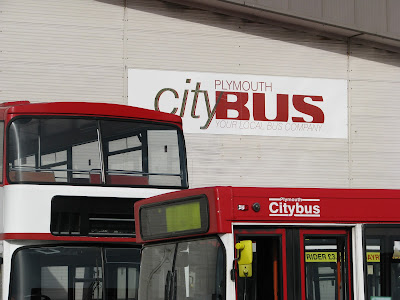 So here we have it in glorious technicolour (thanks to Tom Pearce), the new Plymouth Citybus logo. Sure at first glance it looks quite smart, but look closely. As has been afore mentioned, the image Go-Ahead are creating is very much like that of Go-Ahead's Oxford operations and indeed the logo carries this on, being pretty similar to Oxford's. This isn't necessarily a bad thing, but Go-Ahead promised to keep PCB's personal identity, and so far this seems to be slipping away somewhat.

But anyway to the actual logo, personally I don't really like it. Its far too fussy. Its a bit of a mess with different word sizes, different colours, different fonts, different angles! They need a lesson on KISSing in my opinion! (Keep It Simple Stupid!). For a comparison I've included the old logo beneath as applied to the buses and the side of the building, showing the previous 2 logos. The one on the Dart, though somewhat bland, is nice and clean and tidy, nearly perfect!
As a footnote, on my trip upto the depot, Andrew Wickham (the new PCB Managing Director) boarding the service to also travel upto the depot. But this was no 43 or 16! It was First Devon and Cornwall's 1A! Where is the company loyalty in that, may I ask! There wouldn't have been a massive wait to catch a but from Western Approach to the depot. But dare I say it, this is the foundations First was built on from day 1. "I'll just catch the 'First' bus!"
Posted by Laurence Mayhew at 23:50

I have to say for some reason I agree that I too am not keen on the new CityBus logo. I hope it is not because I just don’t like change! I guess it is also difficult to judge in isolation, perhaps it will look better when it is applied against the new livery. It is an interesting point about CityBus staff using First and not their own services. I am tempted to say just catch the 1st bus that comes along, but I also suspect that you have a point here. Just as an aside, probably totally irrelevant, but the way First D&C are going at the moment it is likely that the 1st bus will not be a First in the future. They seem to be systematically withdrawing from all their routes and certainly seem to show no loyalty to their passengers, be they CityBus or whoever.

Are you talking about the current or new identity? In my eyes, while not perfect, this new logo is a massive improvement. For example, there's no strange mix-up of italic and standard fonts of different sizes, the "Y" in Citybus is now actually legible instead of disappearing into the rest of the text, and thank god the utterly bizarre and ugly cropping of "Bus" is no more.

Even when first unveiled, the current look stunk of one being designed in-house, for as cheaply as humanly possible.

You may not like the new logo, but that is the way in which graphic design these days is going. Trendy & Stylish.