With this week off from school I took a trip upto Weymouth to see for possibly the last time, the 2 'proper' Leyland Olympians which still survive in Weymouth, these being JHU 902X - new to Bristol Omnibus, along with C414 HJN, of course new to Eastern National. 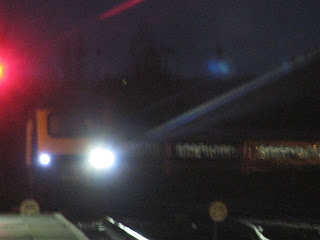 The day started unfortunately not on the bus but in the Fiat Multipla as there was no bus that really gets in early enough to make full use of the day. So having a lift with dad into work made me able to use the 0655 service for the leg upto Exeter. This was led by 43002 with 43035 on the rear. After that it was a quick hop upto Exeter Central on 153377. 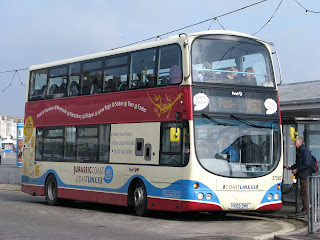 Then came the the journey on the X53. This was my first journey aboard a Volvo B9 and 37582 seemed a very good example. In fact I was quite surprised by the sheer amount of power these have, though really over the 3 hours I spent on the bus, there were few opportunities to show off what the bus could really do, though it did fly up some of the hills! 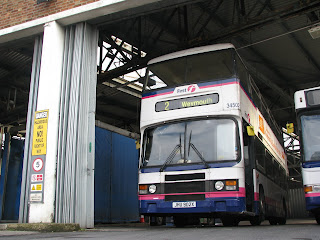 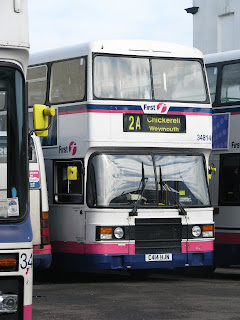 So after a pretty pleasant journey I arrived in sunny Weymouth - a very different picture to what Cawsand was when I left! JHU was parked right in the front of the depot but was not being being used. Round the back sat C414 again out of action! So after a text to Mr Farley about what could be happening I found that they likely wouldn't be put on the road til about 4pm. So that gave me a few hours to get some photos and sample Weymouth's other buses. 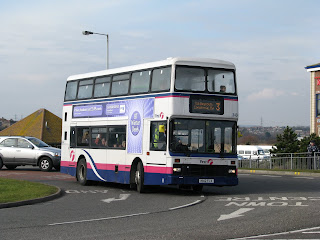 Weymouth has several of these H registered Leyland Olympians which were new to London, as you will note they retain the London style destination box. The ride I had on H142 FLX was very nice - if anything better than the similar K-LAEs we have in Cornwall. 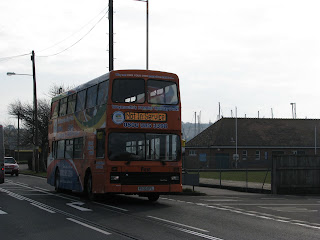 I also had a ride on this Volvo Olympian - P530 EFL new to Cambus in 1996. This was pretty nice though the turbo seemed to be making quite an alarming scream and so the driver took the decision to take her into the depot and get something else out to replace her! 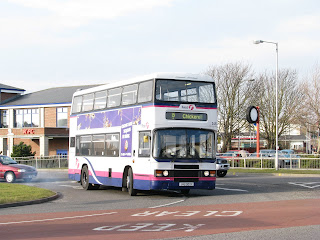 He had a fair choice of vehicles but luckily he opted to take out JHU 902X! So she roared into life and was brought out half an hour later (with a lost journey) onto the 8 to Chickrell. Suprisingly the Olympians are still regulars on the core services in Weymouth. But anyway back to the bus. I must admit even at the age of 29 this Olympian has to be one of the nicest I've been on. The Gardner engine was still in what seemed peak condition and she drove superbly on the route. I never realised how much I missed that whale of a Gardner 6LXB! She carried a pretty full load no problem at this peak time of day. 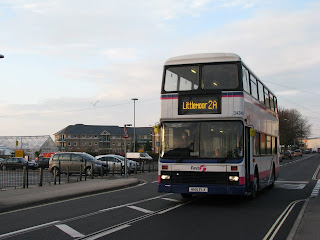 Coming back down into Weymouth though, what did we pass but C414 HJN! I'd worked out the timings of when it should be back so I could just scrape a journey in before heading home. Though infuriatingly the driver pulled her into the depot after just 1 trip and swapped her over for H145 FLX! With this City Centre location of the depot that actually happened quite a surprising amount and it seemed like if the driver got bored he simply pulled in a changed the bus over! 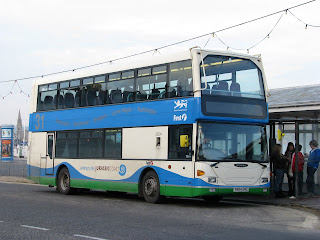 So it was then over to the King's Statue to catch a 31 upto Axminster - a journey I'd been advised to take, rather than using the X53 again. The bus turned up about 15 minutes before the trip, but as 17:45 drew nearer there was no sign of anyone to drive it! In fact it wasn't until around 18:00 that the driver turned up to take her on! And with only a 10 minute gap in Axminster between the bus arriving and the train leaving I was quite tense for most of the journey! The bus really did seem to be suffering from power distribution problems. At times it would blast along but then simply loose power. This meant in the whole 2 hour journey we made up just 6 minutes, mainly gathered by the quick driver change in Bridport. So on arrival it was a dash across the footbridge with the 20:05 to Exeter already in the station! I did just make it and then it was a nice relaxing run down to Exeter St Davids. 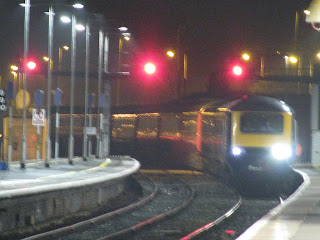 The 20:45 Cross Country service was sitting on the Platform to go down to Plymouth when we arrived. Though if I'm honest I didn't fancy a trip on a Voyager! And would have meant an hour + wait in Plymouth for my 81C anyway. So I stayed on in Exeter to do a bit of spotting before catching the 2122 FGW service. I'm quite glad I did this seeing as I saw a Class 66 hauling China Clay on its way down, and then proceeded with a much better journey down to Plymouth.

A half hour wait in Plymouth then saw me board the 23:02 81C to Cawsand in the hands of Nick and 43809, arriving back into Cawsand just after Midnight!
Quite a day, but was very enjoyable, just a shame that I never got on 414, the whole purpose of the trip!
Posted by Laurence Mayhew at 23:07