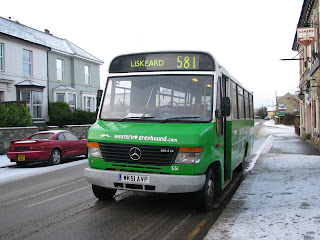 With all this action that seems to be happening down South at the moment I decided to have a quick look around down there on Saturday and indeed as always, a trip to Cornwall brings up several surprises! 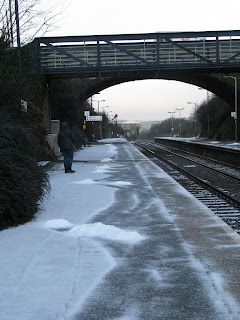 It was quite a snowy start to the day after traveling aboard the 581 down to Liskeard. As you can see in the picture the station manager had been hard at work sweeping the snow into piles right along the platform. 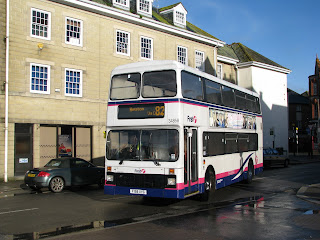 Of course the main aim was to see one of the 'new' R reg Volvo Olympians, though in fact the first thing that greeted me was F158 XYG - the oldest bus in FDC nowadays (of course apart from the open toppers). Personally I thought this had already been withdrawn seeing as its been laying at the back of Camborne for a while now, but no she's back out again! Though it is a bit of a puzzle why, seeing as all the G reg Olympians are now withdrawn, along with the K regs starting to be withdrawn, yet somehow this has escaped the net!
Ver y shortly after (the next bus into the Truro!) was local legend Simon Coates driving L637 LEU, one of the Palatine 2 bodied Olympians. Though he soon departed with the BMC (big yellow school thing!) back upto the depot. This seems to be used as a crew bus most weekends seeing as the Transit is now up in Plymouth. 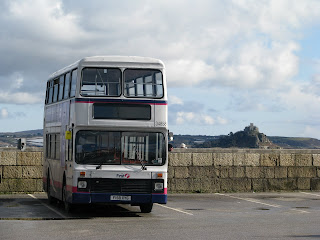 So seeing as time was short for the F reg I took a trip on her right down to Penzance via Helston on the 82/2. Indeed she still goes very well for a bus of her vintage, if anything better than some of the K regs! Annoyingly though, I passed one of the R regs on the way into Penzance, and never saw it again all day! But better luck next time I suppose. 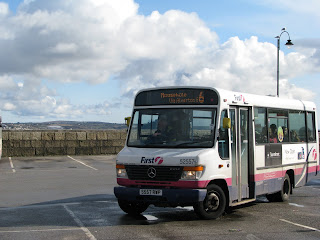 While in Penzance there was again a few interesting things to see. Firstly one of the last remaining FDC Varios, 52557 out on the 6s. 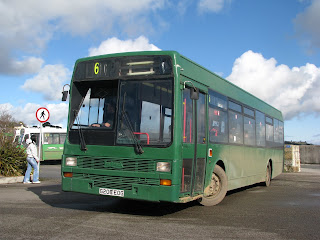 Another one I've been after for a while are the Nocton Lynxs and I finally managed to snap one at Penzance! This one looked particularly good, though the driver caught the edge of the blind box on the canopy about Penzance bus station as you may be able to make out, and made somewhat of a gouge into it! 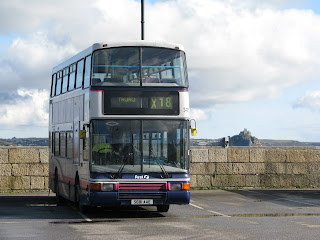 After that it was upto Truro again on one of the new S reg Olympians that FDC have acquired from FSA. This particular one went very well on the run on the X18. 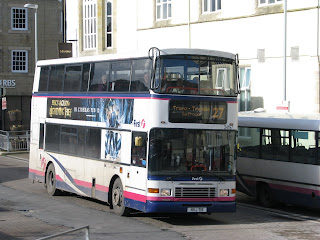 I then caught up with Simon once again in Truro driving 34197 and had a quick run upto the station before heading back upto Plymouth.


Apologies this blog has been a bit rushed, but back to school now time seems to be against me!
Posted by Laurence Mayhew at 21:42

Thanks for your information..

If you are in need of bus rental, bus transfers, sightseeing tours or excursions by bus within Slovenia and other European countries, we are pleased to help you. Slovenia Bus Rental has many years of experience in bus rental, tours by bus and bus transfers. We aim at providing high quality bus, minibus and minivan rental service anywhere in Slovenia and Europe.