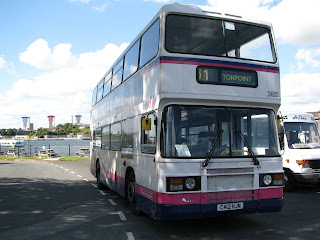 Its a Happy birthday today for C412 HJN! She was first registered on February 12th 1986 making her 24 years old today. The batch of C reg Olympians were actually registered over a period of a few weeks though 412 was registered the same day as C414 HJN. 413 was registered 3 days earlier on the 10th, where as 417 was registered nearly 2 months later on April 2nd.
Nice to see though that some of the batch have made it to 24 years of service. C414 HJN and C418 HJN are the last to still remaining in service now, though it is rumoured that 414 is being withdrawn iminantly in from Weymouth. 418 still survives in the town she has served her whole life up in Chelmsford Essex, again the future is not certain for her!
Posted by Laurence Mayhew at 21:13