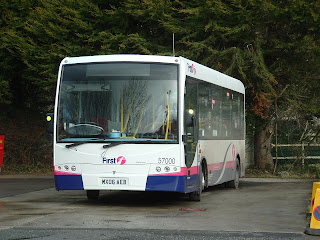 With thanks to a friend I can bring you this photo of the sole Plaxton Primo with First Devon and Cornwall. This bus was used as a demo in its early life until Truronian bought it to use on their services. Of course when it passed to FDC it stayed in Cornwall for a while until a major crash last year near Redruth. This resulted in a fatality but around 7 months later after major refurbishment its back on the road, though this time in Tavistock. As you will note she is now painted in Barbie 3 with similar variations to the Enviro 200 that came from Truronian as well, at least its out of that horrible pastel green! It will likely be used on the town service 87 to replace one of the Solos on this route currently.
STOP PRESS
The bus has now disappeared from Tavistock depot, there was no sighting of it today. This could simply be a routine check up etc but at the moment its gone missing. Any sightings please feel free to comment.
Posted by Laurence Mayhew at 21:50

It was taken back to plymouth, having driven the bus it has a couple of major design flaws, biggest of which is the mirrors being so low and difficult to clean from the cab, it makes it a pain in the ass to use on the 89 town service, current thinking is that it might go on to the 87 bere alston route. but you never can tell