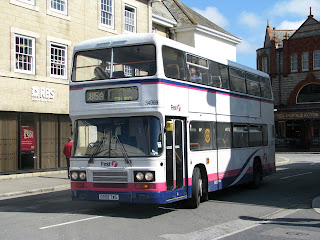 Another happy story of the week is that Leyland Olympian G909 TWS has now passed into preservation! She was the only one of the batch that had retained the older - original front grill rather than being changed to a more traditional looking alternative, so in that respect she always stood out. Talking to other enthusiast we agreed she also had one of the better engines of the batch.

She now lives back home in Gloucestershire near Stroud, with an old Bristol Omnibus inspector that hopes to tidy her up, then re-paint her into the old Badgerline Green and Yellow livery that she was painted in when new! Another feature that will be changed is to re-install one of the old 5 speed gearboxes rather than the one she has at the moment! This will without doubt
be beneficial as some of the newer gearboxes can be a bit jerky and not so fluent.

So things are very much looking up for this Bristol Beast!

Posted by Laurence Mayhew at 20:52