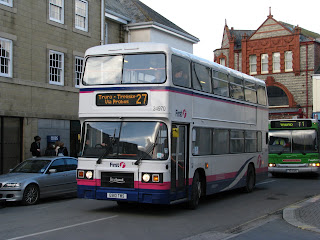 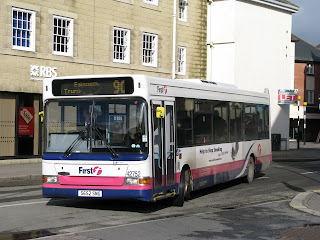 Today saw myself and Louis Rawlings take a trip down to the capital of Cornwall, Truro. Though as usual living where I do the fun started far before we got to Truro!

I caught the 8:45 81C from Cawsand which was due into Plymouth Rail Station at 9:51, 7 minutes before the train down to Truro. Though this started off badly. The bus turned up at 8:54 because of a lorry blocking the road in Millbrook which was not the best of starts. Though by the time we got to the Torpoint ferry we were on time. Though what wasn't expected was the ferry leaving 5 minutes late. That meant we arrived in Devon late. This was then not helped at all by roadworks on Stoke hill and I was starting to get worried. People joining the bus in Stoke delayed us further and we arrived at the station at 9:55, 4 minutes late. I met Louis and we rushed into the Station. Darting towards the fast ticket machine we saw it was out of use. We then went straight to a booth where the ticket buying process was very swift. We then ran out towards the Platforms with the aid of the nice ticket barrier man. From across at Platform 3 came a cry "Do you want the Penzance train" we shouted "Yes please!" So thanks to the very nice train dispatcher we made the train. Without him we would have had no hope so thank you very much!

When we reached Truro we had the aim or trying to track down 2 ex-Torpoint buses. These being 30065 which left the depot a while ago now and also 34809 which has left during the course of this week. The trip into Truro Centre was made on one of the 56 reg Volvo B7s. When we got to the Bus Station we were simpley inundated with Darts, and 1 B7. Pretty boring considering the amount of G reg Olympians we saw last time along with some Alexander Royale Olympians. Though when G905TWS turned up we jumped at the chance of a ride to St Austall. This was a very enjoyable and fast ride, the Olympian ran very well. ON the journey we also spotted Western Greyhound's brand new 58 reg Optare Solo (older style). Sadly we didn't get a picture though.

On return we went and got a quick pasty and then did a bit of spotting. A couple more example of G reg Olympian turned up though again 30065 failed to show as it didn't last time aswell, along with 34809. A great shame!

Though this did make me think. Why if Torpoint's buses are being transferred to there are they not using them?And therefore why does Torpoint therefore get left with no spare buses at all. We have even got 2 on loan from Plymouth depot in the form of Varios 52519 and 52559 (I think). Why not send these buses back here if they are not in use down there! The Vario's can't cope with volume and after the withdrawal/suspension of 50306 and 50301 also needing a major overhaul things are set to get worse. Tridents are also starting to gather problems thick and fast and this again leads me to Torpoint really needing its maintenance facilities and staff which I'm sure would help with some of these problems.

Pictures of today can be seen on my flickr site link below: