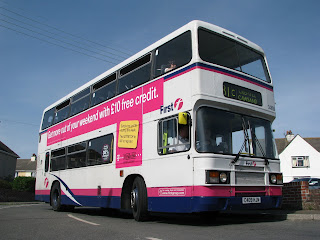 The first word came to be on Saturday on my trip upto Exeter and Taunton with Louis. As there was very few things of interest on this trip I thought I'd bypass it and consentrate on the interesting bit of the weekend.

When we were waiting for a train in Exeter we had a call from friend Mike Hudson. He advised us that C409 HJN was up for sale and was aparently only £450. As you know I am very parcial to a Leyland Olympian and have always wanted to own one of the Torpoint Olympians. These were this one and C412 HJN being my other favorite though to my knowledge this one was a much more reliable bus.

So this led me straight onto e-mailing a few contacts that evening. These included and couple of employees of FDC and FDC themselves to see what would result and how I could purchase it. Simon Coates replied on Sunday morning advising me of a man to contact. He also said he would find out as much information as possible so was a fantastic help. As I was doing this bad news was to find its way into my inbox. C409 HJN had been withdrawn not because it was old but because of a corroded chassis which was getting very fragile. A great shame seeing this bus was the best mechanically, had a very good interior and had a new engine fitted only around 7 months previous.

SO sadly this meant I wouldn't be a bus owner at the age of 14. However much I would love to own C409 HJN I hate to think how difficult and expensive it would be to try and rectify a problem like this.

Derrick Cuff has told me that he has shown interest in the bus though so there may be a life for her yet. PTOTPA will keep you updated on what happens to her in the near future. But my sights are now set on C412 HJN. Question now is, how long will the rest last at Torpoint?

Posted by Laurence Mayhew at 20:43