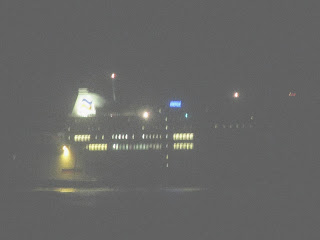 Sorry for the lack of posting this week. This is due to it being the last week of term and a lot of coursework etc has had to be handed in. So with a quiet week forthcoming hopefully it will bring plenty of posting!

SO as promised and right on time Brittany Ferries' new ship MV Amorique has started operation on the Plymouth to Roscoff route. This began on February 10th and the picture shown is of her on her maiden voyage. She did leave late as the crew are not yet fully acquainted with their new vessel though the boat apparently set a new record of time for this journey. Though I know this to be wrong as the high speed Catamaran has done it much faster than this.

This ship is very modern and high tech inside and looks cutting edge from the outside. I lot of time, effort and money looks like it has gone into the ship and I am sure that she'll be good to us for many years in the future.

Hopefully a better picture can be posted soon taken in the daylight though I had to try and take a picture on her maiden voyage however bad the quality may be!
Posted by Laurence Mayhew at 22:56