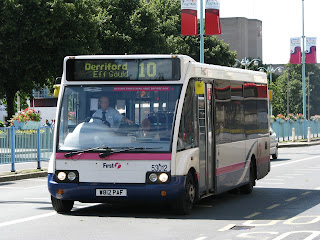 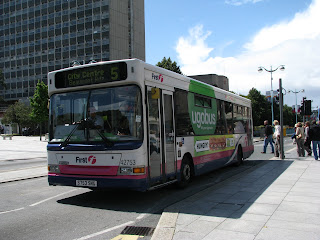 Though it was a while ago I though I had to do a blog on this bit!

Well the fifth part of the day was to take a trip on the 11 with bus driver Paul Revell. Though the first event of this part was on Royal Parade! While waiting for the 11 talking to Paul and Louis the 11 came in behind me, mounted the curb and hit me! Was not bad but if I had been an elderly person etc something much more serious could have happened!

So we joined Paul and went round on 2 rotations in Dennis Dart 42753 (S753 SNG). Though when we boarded the bus the centre console had copalped so we could see no warning lights. ON the second rotation coming down past Toys R Us we went over a small pot hole in the road, the dash colapsed further and a warning alarm came on! We stopped the bus before Royal Parade to inspect the bus. The emergency door was fine there was no fire so the problem was not found. After resetting the system the alarm still went off. We drove the bus upto Royal Parade to let teh passengers off and radioed control. They told us to do checks we had already done again and this again resulted in no luck. After around 15mins they told us to take the bus down to Bretonside and to swap it with Optare Solo 53012. This we did, though as there were no spacing this meant leaving the Dart in the road to get the Solo out, then to get back in the Dart, park the dart and get back in the Solo. We then rushed upto Royal Parade where the 11 behind us had already left and Paul drove to make up time. By the 4th rotation he had caught up all the 20mins lost and booked off duty on time! What fun a bus driver can have!
Posted by Laurence Mayhew at 20:19

Hello! Quick question that's entirely off topic. Do you know how to make your site mobile friendly? My website looks weird when browsing from my apple iphone. I'm trying to find a template or plugin that might be
able to correct this problem. If you have any
suggestions, please share. Appreciate it!

Here is my page :: what quantrim is made of
my webpage - anybody tried quantrim