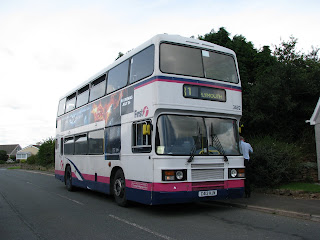 I'm afraid I'm picture less for today's 'events' so I have taken that 'nostalgic' picture where C412 HJN is operating an extended 81 to Crafthole.

Now I'm sure many of you would agree with me on this, but often the extended 81s to Crafthole and Sheviock seemed to carry no one at all. But I have already had several people asking me about whats happened to our bus service! There are now extremely few buses operating to Crafthole. In fact on a Saturday not 1 First bus operates to Crafthole, not even the late night 81Cs which used to include Crafthole. I must admit I used to get very annoied when my journey was lengthened, but for people living in Crafthole it is now a nightmare to try and get anywhere.

The only service that still regularly serves Crafthole is Western Greyhound's 581 (old 181). But these don't seem to be regular enough for commuters or at the right time for shoppers etc on the weekend. Not Western Greyhound's fault, they still carry plenty of passengers on the services they run, and are in line with what needs to be provided. Also because the journey to Plymouth is now with 2 companies the fare has increased. Again not the fault of either company, though it is just another blow for public transport in Crafthole. Maybe this could be an opportunity for a company to operate a shuttle type bus between Torpoint serving surrounding villages such as Sheviock, Crafthole, Portwrinkle etc.

On the Torpoint school buses today, again both buses were Tridents, which were today even following each other around Millbrook. 981 was again not on the blind, but on the bus from Cremyll, James was correctly displaying "81C Torpoint Community School" so thumbs up to him. The destination was so long that it is actually in a smaller font, across 2 lines on the blind.

I'm sure there will be more stories to tell in the near future. I still haven't risked trying out any of the new services, but will try to get round on some, on Saturday. Indeed even bus spotters have been getting caught out in the timetable changes. (Not mentioning any names Luke Farley)
Posted by Laurence Mayhew at 20:05