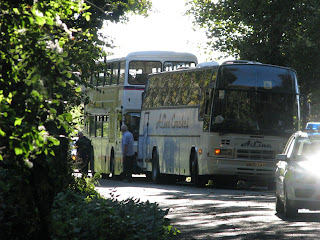 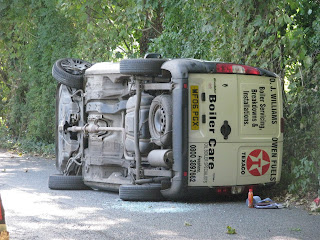 Bus services were disrupted after 4:00 today after an incident on the road coming out of Cremyll. A van was traveling out of the village. By the looks of the scene he swerved to avoid something went up the bank onto the wall and flipped the van, while flinging it across the road. The driver had a nasty cut right the way up his arm, but other than that he was ok. There were no other cars present at the time, though no doubt there will be an investigation into the incident.
Steve managed to squeeze Bertie past the debree on the way down to Cremyll, though when the Ambulence was in attedence then this proved too tight to get the bus through. Ellie (E920 EAY) was also stuck the other side, unable to turn around, along with K803 ORL, and was later also joined by S764 RNE. All three were unable to get by or reverse soo looked like they may be there for some time to come before the van could be moved.
I will feed you informaiton when it comes avalible.
Posted by Laurence Mayhew at 20:51