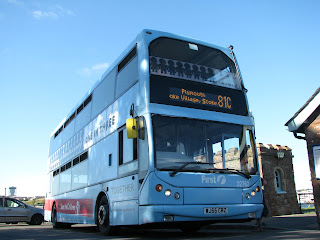 In response to Mr Farley's comment on the last post I was in fact on the bus that he noted working!!

Another late addition to the depot is East Lancs bodied Dennis Trident WJ55 CRZ, 32762. This bus up until now was most commonly seen operating the X80 on which this batch of buses were brought up from Cornwall to run. This batch of Trident was of course initially bought to run the 89/90 from Truro to Newquay, but soon found their way up to Plymouth, in a swap with the remaining Ex-Airbus Volvo Olympians.
She was repainted into the 'Save the Children' livery early last year, and will be a change from the normal pink '54' reg tridents that currently operate at Torpoint.
Though she has been 'transferred' to Torpoint she will still often be used on Plymouth services, she is simply here as a 'spare' bus when another bus is out of action. The bus she is currently standing in for is newly acquired K804 ORL which had a collision with a lorry and is needing work done to her before she can be put back into service! A good start for them!
The bus does seem very good though, especially on hills which she flew up on the run from Cremyll.
But I couldn't help thinking, this could have been one of our Leylands......
Posted by Laurence Mayhew at 19:20