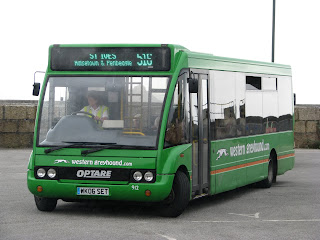 The fate of 181 has now been decided. 181 has been lost by FDC and has gone to Western Greyhound!
Reasons for this move are that Western Greyhound have promised low floor vehicles on the route in the shape of some Optare Solos, and also that the subsity request was £400 lower than that of A-Line Travel's offer for the service.
Shame to see that A-Line lost this opotunity as this could have been a 'big break' for them to have a good profit making route. Also 181 was a major problem for A-Line when it first started forcing them to change the route as A-Line couldn't compete with First in this area. Most of the route had always been A-Line territory that was only served by the old 270. This is what forced A-Line to change to what is now the 80A.
All the same good luck to Western Greyhound and will be nice to see some more variety brought into Torpoint.
Posted by Laurence Mayhew at 22:50