As was thought, C417 HJN, 34817, 4017 has now been withdrawn from the First Devon and Cornwall Fleet. She is to my knowledge now parked up in Plymouth, awaiting the tow I presume. This leaves just 2 Leyland Olympians. The race is on, which will keep going, and which will fall out.

Looking at there past 34812 has been more prone to minor breakdowns which she has even demonstrated in recent weeks, 34813 has always been the most reliable of the original 4, though she has a weaker engine that 412. But its anyone's game at the moment. 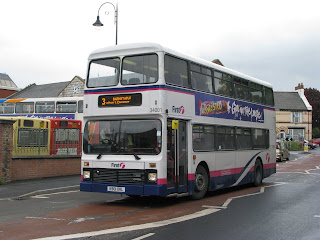 On a brighter note the replacement bus is now in Plymouth. K801 ORL has been spotted by Cuffy on Plymouth duties and therefore it can't be long at all until the ferrylift is fitted and she's in Torpoint, taking up 34817's spot in the depot.

Hi there superb blog! Does running a blog like this
require a great deal of work? I've virtually no understanding of programming however I was hoping to start my own blog in the near future. Anyways, if you have any suggestions or techniques for new blog owners please share. I know this is off subject however I just wanted to ask. Many thanks!