Today saw myself take a trip down to Truro for the 3rd time. The day started off along with Jim on the 7:07 down to Cremyll. After disembarking from the 7:30 Cremyll ferry I decided to walk into Plymouth to 'save time'. I estimated the walk as 10 minutes though it turned out more like 20! leaving my pushed for time when I finally got on the 1A at 8:00am. Though the connection was smooth and I was soon on my way to Truro on the 08:20, though until Liskeard I had to stand on the packed class 150/3. 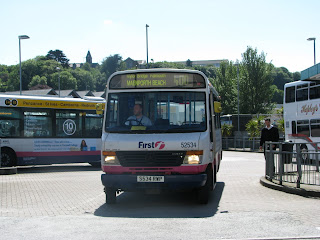 On reaching Truro it was a very good connection down into the bus station on a Volvo B7. Sadly though by a matter of minutes I missed Leyland Olympian A754 VAF going out on service. Therefore I did a bit of spotting for a while. Was quite interesting to see how many ex-Plymouth buses have now migrated there. Mercedes Varios 52534 and 52535 are the latest Vario additions. 52534 had spent some time at Torpoint before this. There was also the 3 Marshall Varios, 52596/7/8 all being used. There were also several of the P reg Dennis Darts that were originally bought to run the 14 and 18 that the B7s now run. There was also Hopeley's Volvo Olympian on hand, along with some Royal Olympians from FDC, along with an array of Solos or Darts. Not forgeting the 2 D reg Volvo Citybus' aswell. 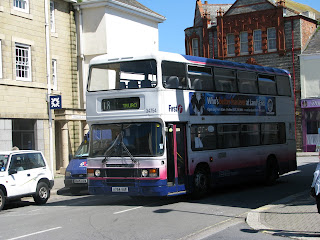 After this time A754 VAF had returned from her trip to Camborne and I jumped at the opotunity. Unusually, she was being used on the 18 to Penzance! Again routes that are usually operated by the B7s, so quite a treat for the traveler's on the run today! Though the 24 year old Leyland did struggle and bit. After all these years on Cornish roads she is a bit tired I must say, but still much more comfortable and faster than the B7s, and no I'm not making that up. They just don't make them like they used to! The run back from Redruth (thats as far as I went) was on a B7 and it was just so dull and slow compared to the ride I had had on the Limp. 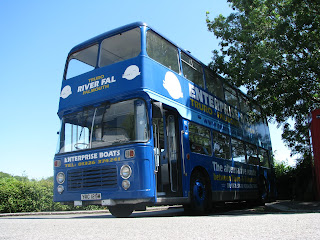 ON return to Truro I made my way towards the coach park. But whats that I could hear! An unmistakeable whine coming from the roundabout, and sure enough, YRC 125M swung round onto the road! The grabbed the camera and took some pictures frantically before it was gone. But there was no worry. The driver pulled over and said "So your a bus spotter then hey! Hop on and come for a ride if you like". What luck I thought! Was a superb driver both in character and in skill and the trip was fantastic. Was also interesting to hear that there have been many offers to buy the bus in recent months, though the owner has been reluctant to sell because of the reliablility and sutibilility of this fine Series 2 Bristol VR. The turning point in Malpas looks even tighter when your actually there, though life wasn't made and easier for the driver because of a parked car where we should have been able to swing the VR round. Though after a couple of attempts we slotted in nicely. 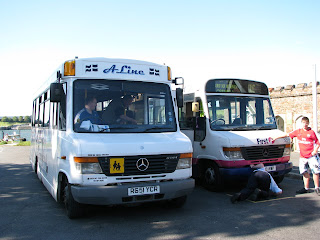 The return trip back to Plymouth was fairly uneventful. Though for the last leg on the Vario, we had Mr Cuff at the wheel, showing off his new loud speaker! Was great to have him back for the day, and shame we now have to wait another 2 weeks for this experience.

Pictures and videos of the day will shortly be avalible on my Flickr: http://www.flickr.com/photos/11717981@N02/

Posted by Laurence Mayhew at 22:46

europa coaches croatia has the ultimate Tour Bus Rental, provides individual accommodations specifically to fit your croatia Party Bus needs. Whether it is a full night rental or just pick up/drop off, we can make it work for you. Limo Buses in croatia are the way to go to get your group around town. Whether you desire a party atmosphere, a corporate feel, a relaxing wine tour, or you’re looking for a rental bus, europa coaches croatia will tailor to your needs. http://www.europa-coaches-croatia.com/

It is a very informative for us. Thanks for sharing….