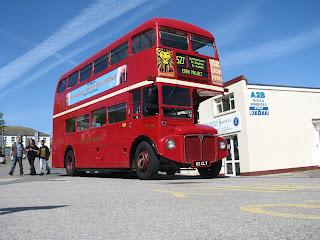 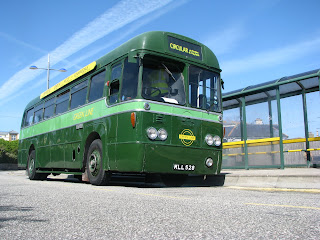 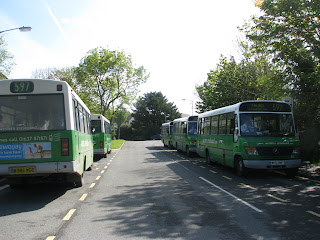 To save me writing about my day yesterday at the Western Greyhound event most of this post will be copied from what I sent to BBC Radio Devon yesterday evening, to David Shepards late night program.

This story is from just today when I was off to the Western Greyhound heritage day. The day started off with me waiting for my 81C in Cawsand. I was there in plenty of time as its usually early. It was a tight schedule into Plymouth to get my connecting bus, but just as buses always do, when you most need them, they fail. Dennis Dart 40002 driven by Gerald turned up 20 minutes late! He was in no rush though and we missed our ferry. Luckily the Western Greyhound was also running late and I managed to catch it! Though this was with incident in that he didn't believe I was under 16, so this took a couple of minutes to convince him of this.

It went smoothly from there until St Columb Major where my connection to Newquay left a couple of minutes late. No worry I thought I have 15 minutes of buffer time in Newquay. Though amazingly I don't know how but by the time we were entering Newquay we were the 15 vital minutes behind time! I was very on edge and as we navigated through the town, things were only set to get worse. We reached Newquay bus station at 11:06, we were pulling into the stop just as the standing Bristol VR put his indicator on! The driver of our bus was not happy with his parking and he went for another attempt. I said to him "Hold that VR, that's my bus!" He took no notice and proceeded with his perfect parking as the VR pulled away without its costumer! An eventful 4 hour journey wasted! The driver was not helpful after this when I asked him "Is there anyway I can chase it" to which he replied "No". I therefore waited until the next bus following the VR 1 hour behind. I asked the driver to let me off where the crossover point is so I could swap to the VR. This happened to be in the middle of no where, miles from any village. After 20minutes the VR still hadn't turned up. And well for the next 1 hour 30 minutes there was no sign of a VR whatsoever!! All that happened was the Vario I had got there on came back! The VR had died on route leaving me stranded for that length of time. Combined with the journey to 'nowhere' this was 3 and a half hours wasted. By which time it was time for my bus back to Plymouth to depart!!

Though the journey back was 'smooth' this was not the case in the literal meaning. 3 more hours on a Vario did no good for my backside and was, for the first time ever, pleased to be on a Trident on the way back to Cawsand.

A complete and utter waste of time, buses these days!! A total of 9 Varios traveled on by myself today! Never again!!!!

Posted by Laurence Mayhew at 21:05