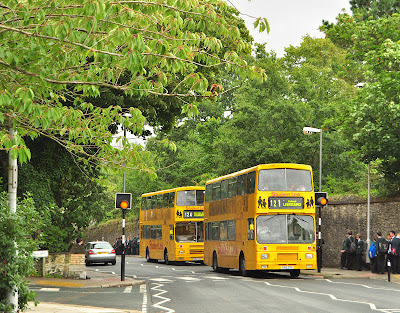 PLEASE NOTE; TOMORROW (Thursday) will now be the final day of operation for the Volvo B10M Citybus and NOT FRIDAY as was previously thought. This is due to the end of the school term tomorrow and hence no services will operate on Friday. So unfortunately there's now just one day left to get in the final snaps before they're retired. Thanks to Dan Marker for informing me of this change.
Posted by Laurence Mayhew at 23:06

I heard that richard stevens wants to keep them for the moment cos they seat more and are more reliable?

I've heard that too, though at the Chatterbus consultation event 'thing'! in Plympton a few weeks ago I asked Brian George who said they'll be going (and should've a few years ago), and 'we'll be seeing more deckers replacing the yellow ones'. We'll have to wait and see!

Had a great trip on F602 GVO today on the 28B, sounded absolutely spectacular.

Although I think indeed it would be sensible to keep them on into the new term incase there are teething problems with the incoming deckers, I have my doubts. There's going to be quite a lot of stock floating around as soon as the Olympics are over, and I just can't see them hanging on any longer unfortunately.

Ooooh, was it you sitting in front of me on F602? You should have said "Hello!". I was considering it, but thought I'd look like a prat asking a random person if they were on that bus "Because its a B10M!", as I had no idea what you look like.

I almost said hello several times though I thought I caught your camera in the corner of my eye several times so I didn't in-case you were filming it! I sent you an email basically saying what I've said on posts here and in PT, as I thought it may be of interest to others. Is F602 better sounding than F600/F605? I've never been on F600/F605 though am keen to know your opinion. It sounded fantastic going up Church Hill!