Get them while you can! 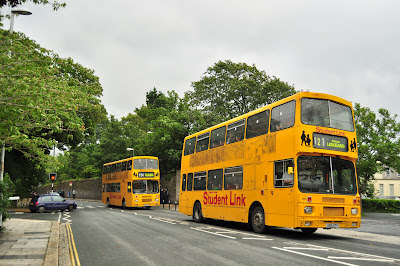 Just as a quick reminder to you all, this week is due to be Plymouth Citybus' remaining Volvo B10M Citybus's last week in service before being withdrawn from service. Although of course it was announced that a majority of the school routes will be returning in September, I have it on good authority that unfortunately, the B10Ms will not make it back come September. As always plans can change; and they often do. We may indeed see a couple kept on as a last resort, or the stock due to replace them not arriving in time, along with a plethora of other problems that could always arise. But undoubtedly if you hold them dear enough to your hearts and don't want to miss it, then you will want to grab this opportunity. If you head upto Derriford Hospital at just after 1700 it is commonplace to see at least two, if not three operating in public service for their run back into the city from their respective termini. If you really want to see how a B10M can perform the best route of the 3 is undoubtedly the 28B, with some great hills to test their strength. Alternatively you can have a quick blast down Tavistock/Outland Road on the 34, or, if you're lucky, a B10M does still now and again operate on the 50 at this point in the day, although this is now somewhat rarer. The other, option you have is to head on up to Milehouse at somewhere around 1515-1530 to capture the B10Ms pulling out of the depot heading to their respective schools to pick up their journey. Unfortunately taking photos of the buses loaded is somewhat more 'dangerous' than it once would have been, but thankfully I am in quite a lucky position as a pupil who has just left Devonport, and hence, thankfully, I'm still a face everyone recognises and isn't 'threatened' by, and I shall most certainly be capitalising on this position over the coming week.
Posted by Laurence Mayhew at 00:43

The 34 at 1715 now is most likely an SPD, like it has been the past few weeks; this is because it comes off the 101 to Tamerton Foliot, and due to the roadworks they can't use Deckers on any services to Tamerton (which'll explain where the deckers from the 42 on Saturday's have gone!). This used to be 50/50 on being a B10M, now it is unfortunately most likely a T-reg SPD.

The 28B at 1781 I can pretty much guarantee a B10M on. This route comes off the 127 Contract route to Tavistock and I've never seen anything other than a B10M on it.

More second-hand deckers will be coming to replace these.