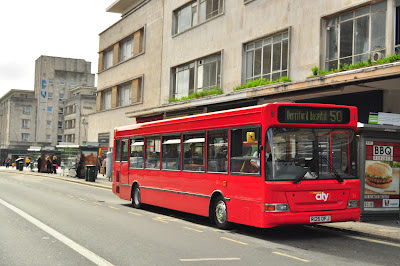 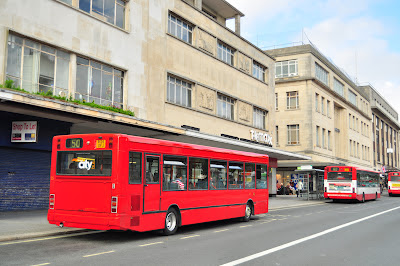 With thanks to Jared Pengelly for tipping me off on this one, I can bring you some photos of R125 OFJ which has appeared out in service in a partial repaint of the new Plymouth Citybus livery. Hopefully they will get round to fully completing this one, unlike several that only ever wore partial livery since the previous livery was being applied, having only the red rim done where there was once grey, without the additional 'swoops' of red added. 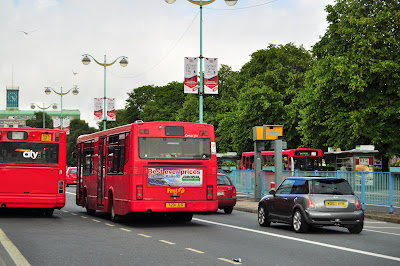 Was quite a strange scene in fact earlier in Plymouth, you could have almost mistaken it for London! This photo shows two of First Devon and Cornwall's Ex-London Darts which have yet to be painted out of the First London livery, along with R125 OFJ looking somewhat Londonesque in its overall red.
Posted by Laurence Mayhew at 23:31

Nice to see those Dart's getting some TLC. They are all in need of a respray and a wash, I must admit that the new wheel covers/trims make a huge difference.

It seems strange to me. Why would they spend money on painting the front of the bus, applying the logo and fleet number on the front half, when they are going to (I would imagine) come along at a later stage, peel them off, and paint it dark red?

Could this be the base to some kind of branding in the future for these darts? Go Ahead seem to be a fan of route branding on a lot of service elsewhere in their empire.

I believe this is actually a base coat.

Citybus where short of single decked buses and this was fast tracked to get it into service.

Saw Dart 25 on the 27 today, was still like this. Caused a bit of confusion amongst passengers though!

I wouldnt be suprised if 25 stays like that, as its got no ramp its unlikely to be here many more years. Giving what's left in service, of 1 to 27 a full relivery, is probably a waste of time and money.

Bus 29 has also been sprayed like this, rumors around the depot are its the new livery . buses 55, 56 and 429 will be the next to receive this.

Why do them in a random order? Why not in fleet number order? Seems a bit silly to me.