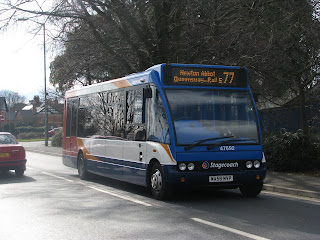 While in Newton Abbot on Saturday I was at the station doing some spotting with Louis. I also pop out to see the buses that come past the station. Though what I certainly wasn't exspecting was a brand new Optare Solo. This came in the form of WA58 MVP, there may have also been another running on the route at the time. The 77 has up until now been run with aged Mercedes 709s. So a shame to see them go. Problem with this/ese new Solo/s is that they look no different from one that was built 10 years ago, to one thats brand new. I'd be suprised if anyone has noticed! Though would make a change from a 709!!
Posted by Laurence Mayhew at 00:46