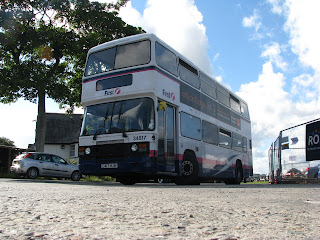 I was watching an epidsode of popular Channel 4 program "Skins" for the first time yesterday. And I was in shock one the main character "Sid" was pictured aboard what looked like an Olympian of some discription. The Seat moquette gave a big hint to me that it was C417 HJN the Torpoint Olympian that used to work in Bristol. On further research I found that the program was made in Bristol so things looked quite promising. In the second program amazingly C417 HJN was seen again and an outside shot confirmed this! C417 HJN a big TV star!! Lucky old Torpoint depot. The drivers don't know how lucky they are and the passengers how privaledged they should feel! So soon the opotunity may come up to own a famous Leyland Olympian! Keep a look out!

I was trying to puzzle together how C417 HJN had been used twice as I found this quite amazing and very ironic. On further research I found that her time in Bristol was nearly 100% on route 222. The only thing I can think of is she used to run a shuttle from the school/college that the program is filmed. If anyone knows more please let me know or comment this post!
Posted by Laurence Mayhew at 21:13