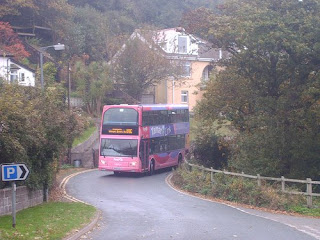 Talking to driver Tony Body yeseterday, it came aparent that since the buses have been working in Torpoint they have been more mistreated and used in different ways.

32760 and 32759 were seen in Plymouth because of differnet parts going wrong. Obviously the work would usually have been carried out in Torpoint though the 2 were sent to Plymouth. As another of the Plymouth Tridents were already off the road parts were taken from 32760 to get it back on the road. later when 32759 was brought in and more parts were taken from 32760. So it seems like the bus is already being cababalised even though it is perfectly roadworthy and only 4 years old!
Posted by Laurence Mayhew at 13:01