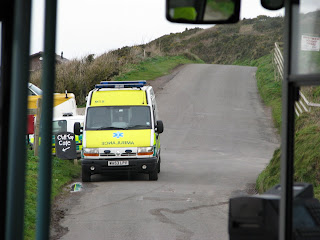 Saturday saw myself and good friend Louis Rawlings take a trip out as usual, but this time staying in the local area! And we never though you could have so much fun in a day in Plymouth!

My days started out catching the 8:45 81C from Cawsand. Sadly it was a Trident but was the best one at least (32758). It didn't take long for troubles to start though. Coming towards Witsand bay holiday camp, 10 minutes into my journey we came across an Ambulence. I know it has every right to park where it was but if I'm honest it was inconsiderate parking as you can see in the picutre. If he had parked just a few feet further back, driver Terry could have threaded her through with no problem. But after an unsucessful attempt we reversed back and waited. After going down to the beech wear I alearted local "1st responder" Brian he came up and explained the situation to terry. Terry then convayed this information to the passengers saying that a young boy had, had a heart attack on Witsand bay and the crew of the ambulence were too busy. Brian could not move the Ambulence because of scrict rules.

A few passengers cam eup with alturnatives while we sat there. Such things arose as "Can you bring another bus from the depot. The responce was that no other buses were avalible (though 52557 was sitting in the depot) and that no other drivers were avalible. Another idea was reversing back down and going via Millbrook like the old 80B used to do back in the good old days!!! Though Terry rejected this after declaring it too dangerous to perform a reversing monover. Another idea was when the bus bound for Cremyll arrived we could switch to that one alturnate buses taking alturnate passengers either side of the Ambulence. Though there was not a bus for another 45 minutes. Therefore this meant a wait of around 45minutes until the Ambulence was moved and we could proceed. 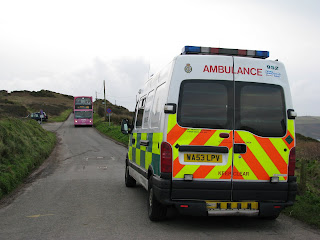 Terry therefore drove at a fast pace to try and make up time, also shouting to the passengers "Is there anyone for Great Park". No was the responce and as 40002 had just turned up that way Terry took the desistion to miss it out to make up time. By the time we reached the ferry we had caught up around 40 minutes and missed our feryr by around 5. Therefore after trying to hard we lost another 10 minutes after waiting for the next ferry.

Something to be learnt from the expierience though was while terry was trying to contact control to let them know he would be delayed there was no one in control, and no one at Torpoint depot. This meant terry having to ring up the fitter at plymouth to let them know the situation. really control should be managed at all times the buses are out though this is rarely the case.

Luckily Louis was also late after oversleeping and his 11 not turning up!! Ahh buses these days!!

More to come tomorow!
Posted by Laurence Mayhew at 21:18