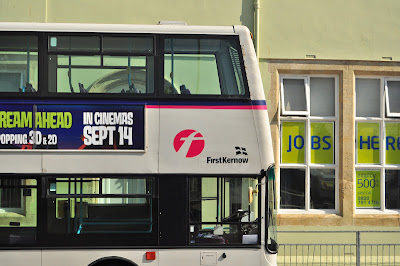 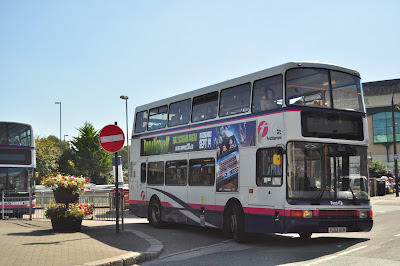 First Devon and Cornwall have began to capitalise on the new freedom to be able to locally brand their fleet in tune with the area, the first of this being the various Cornish depot. Buses within Cornwall rarely stick to the same depot, switching regularly, if not daily between various outstations, and hence a general theme was needed. This has materialised as 'First Kernow' and has quickly found itself onto quite a number of buses within the fleet. Its kept nice and simple, in fact you could probably argue its slightly too low key, with it only being placed above the driver's window and the front doors, but none the less its tasteful, and satisfying to the locals - the Cornish flag being particularly welcome! 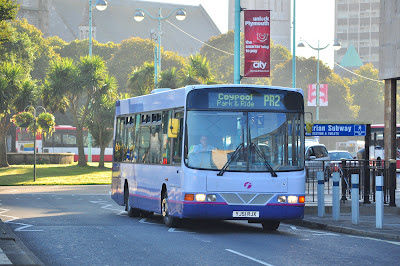 Over the boarder we have seen the first of Plymouth's fleet to be re-painted into the new First Group livery, with the honour going to Volvo B6BLE, YJ51 RJX. YJ51 also has the claim to fame of being the first B6 in the country to receive the new livery, and I must admit, it does look a lot better on a single decker with less block colour, than it does on the Enviro 400s. Unforutunately 40586 has yet to be branded with a local identity in pink lettering along the sides, and speculation continues as to what it might end up being! The obvious answer would be Plymouth, but considering that Plymouth depot operates to Torquay, Dartmouth, Tavistock, Okehampton, right across to Bude and south towards Torpoint and the Rame Peninsula, Plymouth doesn't quite fit in. South Devon is a possibility but again, several services do operate into Cornwall. Others suggest they may wind back the clock and apply Western National, although to my knowledge, no other First subsidaries have yet to take this route, and have instead stuck with geographical information with their branding. First Somerset and Avon have gone with 'West of England', so its possible we may see ours applied with South West. Through all this questioning though, its perfectly plausible that what we actually may end up seeing is First - 'Devon and Cornwall'! Now wouldn't that be bold...
Posted by Laurence Mayhew at 23:51

First potteries have painted there 'gold service' in the old PMT colours so its possable First may revert back to Western National. It does make sence.

BTW service X53 into Exeter was using a Wessex branded, new livery bus yesterday afternoon, couldn't catch any other details as I was on a bus in the opposite direction

It will soon be branded for the new 88 service from Ivybridge to compete with Go-Ahead.

My bet is First Devon...that is what they are referring to themselves on the web site as for the launch of service 88. I would have preferred WQestern National though!