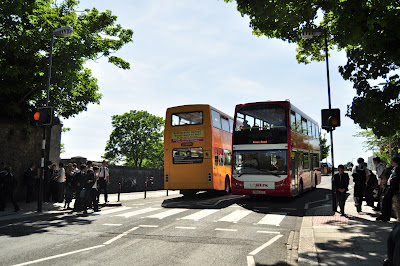 Seeing as my days at DHSB have come to an end I think this week it's appropriate to post a few photos of the stalwart Volvo B10Ms (and a rouge B7 sneaking in too!). The first photo, although technically imperfect, has quite accidentally come out really well in a very interesting effect. Unfortunately the shadows were playing havoc making any really good photography nie on impossible, but for historical importance there's not much that can beat a perfect lineup of 4 B10Ms doing what they do best. A scene soon to change, not only because Plymouth Citybus are withdrawing the shorter distance routes due to Plymouth City Council withdrawing their funding, but because of this is seems likely the B10Ms will be totally withdrawn, although as we so often see, plans can change! With a new man at the helm of PCB we may see the B7 deckers off into public service competing with other routes. There have certainly been sightings of B7s in Torpoint, so will be interesting to see if this will indeed materialise into a competing route with the 81/A. Aside from that there has been questions arising as to new services replacing the traditional Plymouth school network, and I am now in a unique position to say that at DHSB at least, we will be introducing new services to replace PCB's existing routes. I was asked by senior management at DHSB to come up with a solution to the problem, filling the gaps that would now exist in services for DHSB pupils. My new network has now been finalised and tender agreements have been drawn up, allowing us to start tendering to various Plymouth companies very soon. 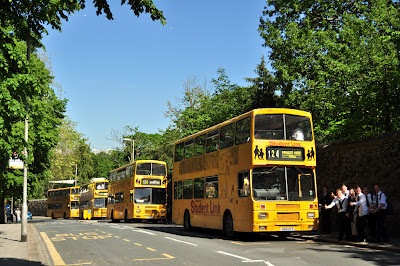 Posted by Laurence Mayhew at 17:46

These B10Ms really are such lovely buses, it's a shame that they'll be gone in 6 weeks!

If anyone would like a 'final trip' on them, they do still appear as duplicate services from Derriford and Crownhill. These are the departures they can be used on, where 1 is the most likely to be a B10M.

Obviously these runs are the buses that have just come off the school runs and rather than run back dead they're used as PM peak duplicates. I know the 127 does the 28B, and I think the 128 does the 40, and I'm unsure on what school routes the 50/34 come from.

I believe these buses are also used on the Tesco and Asda free shopper buses during school terms.

These really are lovely buses, they've really got some 'go' in them, and are so well made.

183 and 188 were withdrawn on April 2nd (F600GVO and F605GVO, the latter being in the black Larry Spear ad'), and I believe are still sitting at Milehouse. We've only got:

F601GVO is my least favourite; solely down to the fact it has a massive problem with slipping gears; it just makes a really loud 'screech' when changing from 1st to 2nd ect.

G621OTV, which I got on the 28B on Friday, is a much better example of a B10M. It has a lovely sounding gearbox and you really can feel the acceleration.

G615OTV I'm not so sure on. I don't know what gearboxes the other B10Ms have, though this one certainly sounds different, and in my opinion, less good than the others. I'm pretty sure the gearbox in this B10M is a ZF.

Finally, Laurence, would you be able to film one more B10M? I filmed G621 on Friday, though with my camera having a video resolution of 640x480 it's not exactly brilliant! I would be really grateful for one more video.

Reminds me of my time at DHSB back in the 80s. Morning school bus was the 8D (or 9D?), the last conductor-operated bus with PCT, I think. Always an FJY/E PDR1, and (as it was a 'D' not an 'S') it was classed as a dockyard bus, so after going to the 'yard dropped us in Kings Rd for a hike up Rectory Lane.

@Tom; I couldn't agree more, they really are stunningly good buses. Such lovely solid reliable vehicles, and as you say, do really shift! While I still just hang on a a pupil of DHSB I am tempted to shell out 6 quid for an interesting trip on one to Tavistock or Kingsbridge, possibly even the Liskeard service. Really be able to see what they're made of then!

Indeed F601's gearbox is awful, which is why it surprises me they've kept that one going, and not F600 of F605. F600 was certainly a brilliant example, if not my favorite of the batch, then again I haven't sampled all of them to date.

I would indeed love to have been able to but as you probably read my old Canon which I used to use for filming is long gone, and my new Nikon's video quality is awful. My phone's isn't too bad, so I may have a go with that, but I'm certainly missing the video capabilities of my Canon.

@Colly405; Oh brilliant stuff! Would have been lovely hearing them thundering up the hill along the dockyard walls. Wish I'd taken a few photos outside DHSB while the final TTT-X Atlanteans were still just clinging on towards the end of their lives, around the time that I started.

I was very surprised that 183 and 188 were withdrawn! I believe they're both still sitting at Milehouse, and they're currently off the road/SORN.

I think it would be a really interesting trip if you had a go on one of the contract services; maybe do a 127 to Tavistock and the driver might let you stay on for the dead trip to Derriford and then you can stay on and do the 28B. Citybus certainly charge enough for it! I think it's something like £600ish a year. Just an idea!

I did read about your new Nikon camera a while back - seems like you can't have it all!

Yeh it does seem very strange really, no idea why they withdrew them in this order. All I can think of is the dates for MOTs and tax etc was later on the ones they've kept going, although even that seems quite unlikely. My favorite B10M, hmm I am tempted to say G615 because of its gearbox but I think I'd have to go with F600 out of the ones I've been on. That really did sound stunning when I last went on it.

Indeed would definitely be great to do before they finally go, I may well splash out 6 quid for the fun of it! Indeed its £620 for a yearly pass on those services! Not cheap at all but then again, its still cheaper than using First to and from Tavistock every day, and more convenient.

Indeed, always seems to be the way unfortunately! Will have to see what I can come up with.