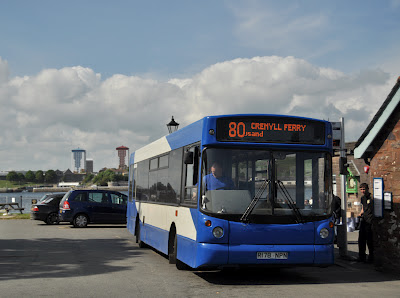 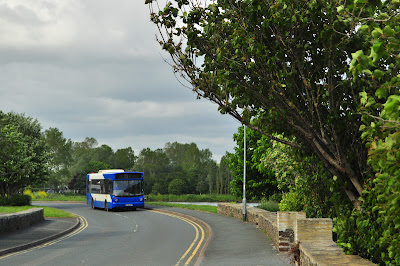 A-Line's ill-fated Volvo B6 R178 NPN has stepped in for use on the 80s over the past few days due to ongoing problem with R651 YCR's gearbox. With the X reg Vario being used full time on the Liskeard services the B6 has been laid up down at the depot as the spare bus, so this has been its first run out for a few weeks. It certainly looks very smart and is indeed a pleasure to ride on, but size is again the issue with this bus. Although this extra capacity is very much welcome, with the Vario reaching capacity on the popular trips, the length and weight of the bus have meant the drivers have struggled to keep it on time on what is already quite a difficult schedule to keep to. Although loading times are reduced thanks to the low floor, its noticeably slower on hills than the Varios, and corners such as the one you can see it negotiating below all build up the lengths of time for the journey, causing a knock on effect during the day, as was experienced on the Liskeard trips. It was a lovely send of though as I boarded R178 for what was my final day as a pupil of Devonport High School for Boys on Wednesday, before going onto study leave, with more exams up and coming over the next month. Then again, it would have been apt to finish my final day on a Vario, one of the few constants in my period at DHSB over the past 7 years, albeit the ones I traveled on in 2005 being newer, and owned by First! 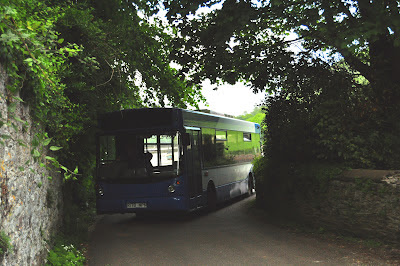 Posted by Laurence Mayhew at 23:40

I think its a shame to see the bus not being used or gotten rid of.

The livery certainly is very smart. Can the schedule be re-timed?

It is even more of a shame to see, in Liskeard and, no doubt elswehere on the route, that A-Line's attempts to publicise the route range from poor to non-existent.

Compared with the high standard set by their predecessor, Western Greyhound, A-Line's efforts are lamentable. On the bus stop flags - nothing. On the bus shelters - nothing. On one pole on one side of the road, an illegible sheet of paper (faded away to nothing) in a plastic bag.

Say what you like about this bus. But if the passengers can't find out when the bus runs from the stop, they won't use the service.

Granted, Aline have go some work to do to improve there services. Both buses and Publicity. But this is really a first for Aline. I know there was a bus to Trago but that was one bus a day. They have got work to do and I hope they do well or the next contract will be the Western Greyhound.

@Anon 20:19; Indeed I agree it is a shame, it a lovely bus, but just too heavy on fuel to make it viable to run every day. The timetable again is completely inflexible on the 80 seeing as it needs to be able to time in with the Cremyll Ferry which is every 30 minutes. The only alternative would be to run it every hour which would understandably be hugely wasteful of resources, as well as being inconvenient for the customer.

@Anon 09:11; Certainly fair criticism, especially considering that the timetable A-Line run to is completely different to what Western Greyhound used to offer, making the services even more confusing and alien for anyone wanting to use the service. Even if the B6 had some branding applied in the form of a website, or even the company name this may have marginally helped, but even that isn't present, so indeed people haven't got much hope unless they actually wait for the bus and pick a timetable up from the driver, provided they are patient enough to wait for it to come along!

@Anon 21:44 Yes indeed fair point, it is certainly quite a step up from what has been operated before, with A-Line taking on a considerable amount more work in April both in terms of extra service work and school contracts. Its possibly a shame therefore that it wasn't fully prepared for so the new services could start with a bit more of a bang. The Trago route had a very loyal following of regular customers, quite possibly because it was once a day and was therefore something more special and exclusive, as well as actually being very useful. The Liskeard service doesn't offer that. Since First Devon and Cornwall started it in around 2007 it has never been hugely popular though.