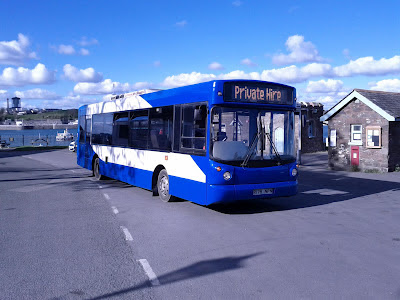 Photo, thanks to Jamie Limb


http://www.ebay.co.uk/itm/ws/eBayISAPI.dll?ViewItem&item=150809267614
EBAY LINK NOW ADDED
Unfortunately it seems that A-Line's latest addition to the fleet will be a short lived one due to various operational problems found with the vehicle over its first month of operation with the company. The vehicle's size has been a major factor in the decision, negotiating a vehicle of this size through small villages, Downderry in particular is no easy task, and has caused knock on delays throughout the day on the Liskeard services, which can only get worse during the summer period with increased traffic. This coupled with the huge fuel bill, with the bus averaging just 9mpg, concluding in the weekly fuel bill hovering between £900-1000. Shame considering the effort put in by various employees to get her to the wonderful standard she is currently presented in. I had my first trip on her yesterday, and indeed it goes very well indeed, by far the best B6 I've ever rode on, although, deafeningly loud! As you will hear from the video below, there sounds like quite a large air leak of some kind, which I'd presume is coming from the turbo. Certainly very comfortable though, and was a privileged to be driven on an exclusive journey, by the manager himself! The replacement vehicle is likely to be another Vario, but as always I shall keep you updated on any developments.

Well, I don't want to seem like a knob, but surely someone at A line must have thought about the vehicle size and the routes before the vehicle arrived.

What MPG would you expect with a Vario?

No no fair point really. First of course used to send deckers through Downderry regularly so it was presumed that the B6 would cope ok but the overhang on the B6 has been more of an issue than expected. The timetables are also a lot tighter on these service's that First's, so there's less margin for dwell time on the route because of traffic.

MPG for a Vario is generally around 12-13 MPG. Still not brilliant, but when you're doing that sort of mileage is makes a considerable difference.

The B6 would always drink more then the equivalent Dart, but I can imagine all that obsolete and (I also presume) non-functioning air-con equipment plus the heavy bonded double glazing must be partly responsible for the lousy MPG of an elderly bus like this.

Urban operators with a modern fleet would kill for 9mpg. Citaro bendies in the Smoke did about 4.

Well on the comments of size a coach goes through downderry every morning and I did take a decker with first through with no issues.

The mpg was what was to be expected and we have averaged 10.2mpg with our vario's average about 14 so for extra size and increase in engine size its not to bad.

Are they going to buy anything to replace this?

It certainly looks a nice bus, inside and out. Good job on the paint!

@Anon 22:28, indeed you've probably hit the nail on the head there, its certainly heavier than the standard B6 with all the extra kit on board, as well as the relatively heavy ALX 200 bodywork. Must all add up, especially when you're hauling it around for a good 12 hours a day.

@Anon 08:28, very true indeed! Citaros have always been awful for fuel, but I suppose the volume of people they carry makes it proportionally worthwhile, where as a small insignificant countryside route has got to be more efficient to stay afloat.

@Anon 19:04, Yep its true its perfectly possible to get the vehicle through when traffic is reasonably light, but as soon as you've met 2 cars and had to reverse out the way etc, with the timings being so tight (1-2 minutes turnaround at each end on most journeys) there has been a knock on effect throughout the day gathered very quickly. Sometimes its fine and you breeze straight through but other times its a nightmare, and the problem would only be exacerbated during the summer.

@43A, Indeed there will certainly be a replacement, most likely to be a high capacity Vario :-(

Can anyone please find out what the Yellow Dart is at the back left of the Milehouse Depot?

Looks as though it's a bit of a mess, bits of grey but mainly yellow. Perhaps its 28?

The yellow dart at milehouse is bus 39 just had its dial a cab advert removed ,awaiting repaint due to paintshop being busy .