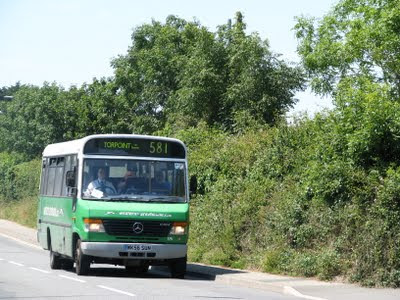 Cornwall County Council have announced huge cuts for bus subsidy in the county, that will effect many routes across the board. In the Plymouth area, the 581, Torpoint to Liskeard is one of 17 that could be in for the chop across Western Greyhound's network. Western Greyhound have said that they are preparing for de-registration of these routes if a compromise is not met, as with the new reimbursement rate on the concessionary passes, the routes will not be viable to run. Currently the rate is 73.5% of a normal fare, but with the cuts, this will reduce to just 44%.

Mark Howarth has said "We are talking about routes in north Cornwall, west Cornwall, Torpoint, and even some city routes. It's right across the board, seven days a week."


First of course will also be effected by these changes, though they have not yet given any specific details on what may be cut, other than these more general comments:


"If the amount of money received per concessionary passenger falls that means that we'll have to look at service levels we currently operate.
"Ultimately this decision may result in a significant number of routes being completely withdrawn. We would urge the council to reconsider, taking into account the far-reaching effects that this decision will have."
It will be interesting to see if CCC will reconsider the reimbursement rate, or whether we will see some substancial cuts to the route network across Cornwall over the coming months.
Posted by Laurence Mayhew at 21:38