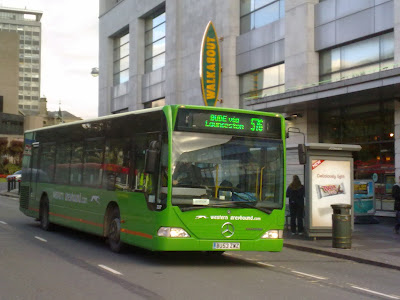 Today I had a lucky moment when I met Western Greyhound's new Mercedes Citaro BU53 ZWZ on Union Street this afternoon while walking up through. Here she is working when she has been bought to do, the 576. The WG service has proven very popular and its not uncommon to see people standing when the '59' reg Solos are operating the route. Of course the Citaro will be able to provide additional capacity on the peak journeys. I must admit this one really does look stunning complete with the green LED blind. A real breath of fresh air with the rather drab colours of buses in Plymouth. Its also great to see WGL doing so well and being able to invest further.
Posted by Laurence Mayhew at 23:22

It will probably never happen but it would be good if Western Greyhound could purchase (take over) more of First's operations in Cornwall and the Plymouth area country services. From my limited experience of Western Greyhound they seem far more customer focussed than First Group!

You have to remember that WG is now bigger in Cornwall than First, so it's entirely possible that, operationally at least, WG could take over all their services.

Of course, if BSOG is scrapped then WG may have to start retrenching rather than continue expanding.

The reason for the change is that there is now a service in the morning and evening that run past Saltash College, the Citaro is used in the evening service only, as far as I have seen & when pulling out of Saltash College the bus is heaving. Its no wonder they needed a bigger bus, the Merc Varios couldn't have stayed on that service, thats for sure!

But how much (little?) of WG's network is commercial compared to tendered. As belts get tightened in forthcoming months and years, who is more at risk?

I guess with the possibility (certainty) that BSOG and tendered services being cut then WG is most at risk, no one can deny that! It is just that First seem to me to have something wrong at their core. Some of their staff either seem scared to death or others at war with their employer. I know they (First) have some excellent and dedicated members of staff but overall to me they seem an unpleasant company & I just think that Devon & Cornwall deserves better! Just wish that |WG could fill the gap with any affected staff being moved to a better and more pleasant employer
, but of course in the real world this will sadly never happen?