Getting set for Plymouth Hoe 2009 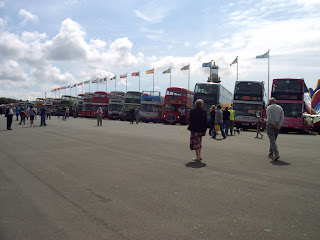 The 2009 Plymouth Hoe bus rally is set to be one of the biggest and best ones there has ever been in the Southwest. The rally is already unusual by being done on a two day basis. One on the Saturday for running, and the Sunday for exhibits and short rides. There is also usually 50 buses attending on the exhibit day. This year will be pretty similar held at the start of August but the 2009 rally will be different. This rally will be special as it is celebrating the 80th year since the Western National Omnibus company started off in 1927. And it is the 10th anniversary from when the company moved from there old depot at Laira Bridge to there current depot at The Ride. Well for 2009 it will be either a two or three day event run by the Western National Preservation Group, West Country Historic Omnibus and Transport Trust and First Devon and Cornwall. There will be memorabilia on sale with many treasures from the past. Talks from WNPG and WHOTT. FDC will be copying Stagecoach and putting some of there modern vehicles into old liveries. Buses operating old routes with classic buses. And over 300 buses on display from all the groups and privateers. We all look forward to the 2009 rally.
Posted by Laurence Mayhew at 16:41