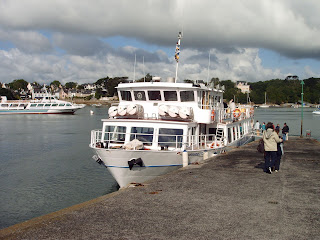 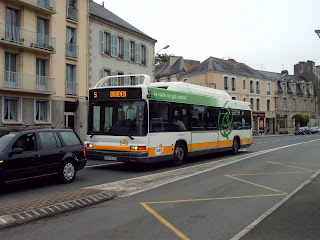 Hello. I have returned from my week in France so I won't have much news from the area so I might talk about french public transport a bit.

Firstly I would like to publicilly thank Luke Farley for covering for me while I was away. It all seems to have gone well.

At 9:54 I am going to go and take my first picture of 81C and I will publish this soon after.

What I do think is that French Public transport is rubbish. I was going to have a trip on one but there was no bus near me and I can't speak french. But there arn't any anyway. There are loads of bus stops but no buses for them to stop at. I did pass one depot at about 9:00 so the rush hour and the depot was full. All the buses were sitting there idel and the bus station was desurted. The only place i did see a bus network all be it 5 frequent routes was in the town of Quimper. There was not even any or very few the the capital of Brittany Vannes. But the Quimper buses are quite nice. One is pictured above. I would say around 50% of the buses there were gas powered. So we are quite far behind in that aspect But hardley any of the buses are low floor so we are ahead on that aspect. And really that is about it except a ferry company which I will talk about tommorow and one of them is pictured above.
Posted by Laurence Mayhew at 08:18