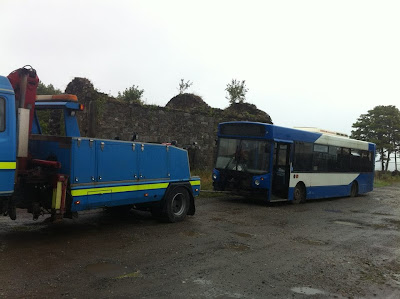 Volvo B6LE R178 NPN, or as she is more commonly referred to as now, HM 2053, has continued her progression in preservation with new owner Allan Wagner, having recently been moved to a more permanent storage site in Plymouth. The bus had previously been stored in Millbrook after being removed from A-Line Coaches' depot after the sale to Allan.

After issues with the original recovery company that was selected to transport the bus to her new home, well respected Field Services were taken on to transport her to Plymouth, using stalwart Mercedes wrecker P778 FOD and a draw bar to complete the journey. 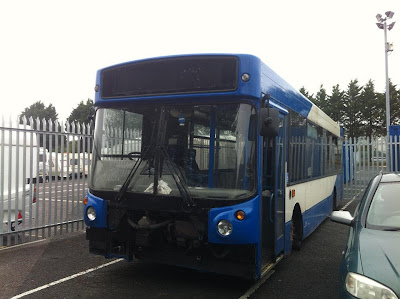 Through the Facebook page, there has been a growing community of Hong Kong based enthusiasts becoming interested in the preservation of the bus, with many excited by the plans to restore her into her original Hong Kong spec. The B6 was certainly a vehicle Hong Kong took a liking to, referring to them as the "Smiley buses", thanks to the Alexander body's curved front panel. R178 NPN is a somewhat unusually capable example of the type despite some overheating issues, and appears to have been appreciated through the generations thanks to her notably loud engine and gearbox compared to what you'd expect from the sluggish B6 you will more commonly come across. It is hoped that R178 will soon be out on the preservation scene, with plans currently in place to have her running during 2014.

To follow the continued escapades of the bus, please take a look at the Facebook page for the bus which is can be found at; https://www.facebook.com/HM2053?fref=ts

Photos come courtesy of Allan Wagner, many thanks!
Posted by Laurence Mayhew at 22:05

Does your bus have a proposed route yet?

I have lots of different ideas! But it could be 3-4 years before she goes into service, and operators seem to have the same ideas now... so in short, no, But I'll make sure she gets into service again! :)