Memories from a Mercedes 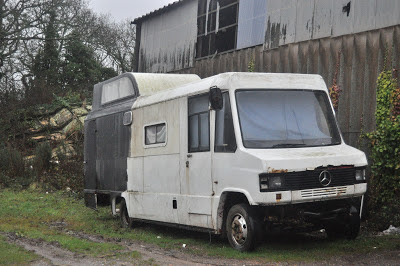 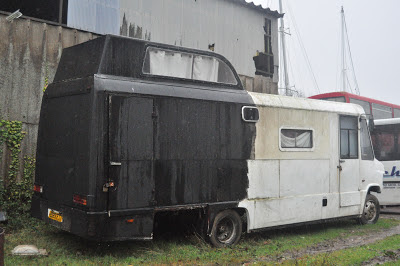 Refreshing  to re-discover  was H989 FTT, a Carlyle bodied Mercedes 811D, modified as a camper, but new to Red Admiral; later operating with Burtons of Brixham of which the parent company, Transit Holdings, also operated. H989 has been tucked away out of sight for many years in Millbrook, long lost by the bus enthusiast. Thankfully, A-Line Coaches manager Jim Goddard was still aware of its existence, and with a sharp mind, the bus sprung straight to thought when N276 PDV blew her engine a couple of months ago. After lying uninhabited for some time, H989 was dragged to the depot where her engine was extracted, and mounted into N276 PDV. Thanks to this, she is quite easily the nicest 709D I've ever ridden on. The more powerful turbo charged engine from H989 pulls N276 along like no other Mercedes minibus I've ever rode upon. As you may be aware, the hills around Cawsand, Cremyll and Millbrook and pretty steep, requiring 2nd gear with a 709D in places, with the engine revving high into the rev band. Amazingly, N276 now pulls up in 4th on the same hill, and can even be teased into 5th, and still pull! Thanks to this ability, N276 is now achieving even better fuel economy than before, as well as being able to keep to time much more capably on the demanding route. Really is quite a pleasure! The fate of the rest of H989 will lead her to a scrapyard in the very near future unfortunately, although, was probably quite well past a prospect of preservation looking at her general condition. Still, it's nice to know that she has been so noble in her last act, losing her heart to keep a sister going.
Posted by Laurence Mayhew at 23:59

Nothing whatsoever to do with Stagecoach, Laurence.

The owners of Burtons sold the business (Brixham Coaches Ltd) to South Midland, the former NBC company in Oxfordshire.

Stagecoach didn't come onto the scene for several more years (not until 1996).

H989 FTT was new to another Transit Holdings company, Red Admiral in Portsmouth.

Am I right in thinking that Burtons was only sold after the death of old Mr Geddes, and it was his nephew (I think), that sold it.
Mind you Devon General O&T Co Ltd (the proper Devon General) had been after the business for years.
Remember buses running on a renumbered 12 service, Torquay to Brixham, as service 100 using the Burton Fleet name.

I don't know. With deregulation, Burtons gave up running the 118 between Kingswear and Brixham jointly with DG and went head to head running from Kingswear through to Torquay in the mid/late 80s. Whether death, competition or something else caused the sale, I have no idea.

The 100 came about in Transit Holdings days when they introduced the G-UDV Merc minibuses along with the 'Riviera Connection' brand. Prior to that they ran five Leyland Tiger buses on the route that South Midland had ordered but were delivered to Transit Holdings after the takeover.

Ah my apologies, many thanks for the info on the real story Graeme. Blame my A-Level Economics teacher, a man you would hope you could have trusted on all matters, especially considering that he lived in the Bay during this period! He told this very extravagant story of Stagecoach coming in and swamping Burtons by running buses for free up and down the Bay until they could sustain it no longer... Makes you wonder what else may have been said over the years as inaccurate as this account...

That was a different episode altogether, although timewise it was a similar point in time - July 1988.... for just two weeks. It wasn't aimed at Burtons at all, they just happened to caught up in it but no doubt suffered a bit of collateral damage during those two weeks.

The operation was called Freebus and used six Leyland Nationals (if a mere six buses can 'swamp' a whole route running between St Marychurch and Paignton Zoo!). The only part of Burtons route that was covered was Torquay to Paignton town centre.

It was, however, organised by Stagecoach (Hampshire Bus to be precise) but was a joint venture with City of Oxford Motor Services. It was partly in retaliation for Devon General's owners having set up Thames Transit to compete with COMS in Oxford a year earlier and partly to try to disuade them from doing the same thing in Basingstoke in competition with Hampshire Bus. Thus it was designed to harm Devon General rather than Burtons but in the event it was stopped after two weeks when DG obtained an injunction.

It had no effect on what was happening in Oxford but in the end the Basingstoke operation was never run by Transit Holdings/Devon General as they sold it to Hampshire Bus before it started, although Transit Holdings kept the 24 buses that had already been delivered. See my photostream: