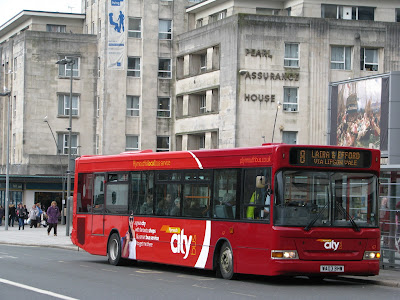 
Now there has been a lot of interest in this new livery Go Ahead have applied to Dennis Dart 67. I better start with my view though. I certainly think the livery is very smart and modern, is really does look professional, although the curves of the livery simply do not suit the 'boxiness' of the Dart, or any other bus body for that matter! The front red is also somewhat too dark, the red used to the rear contrasts with it a bit too much. Possibly in reverse order this would have been better as Omnibuses pointed out.


Though unfortunately we really cannot hide the fact that the livery is just that bit too similar to the Oxford Bus Company's livery. It has also been likened to Southampton's Uni-link service, which uses the same sort of pattern, but with a different color scheme. The colors are just far to close to Oxford's, and it just has that air of 'what was left in the shed' about it. I by no means am disputing that its smart, but we were 'promised' something individual and in keeping with the city. It has been mentioned that at least red has been retained. But actually, if you think back through PCB's previous liveries a 2 tone red has never been applied, unless someone can correct me. It has always been block colors of white, red, grey and black. Of course if you were being technical the old Countrybus livery applied to the LHs in the 80s(?) included a cream base. It is also true that the company is now of course part of Go-Ahead and that we should 'expect' something more corporate from the company. But looking through all of the other subsidiaries, no 2 are really the same, so its a shame the individual trend hasn't been fully carried forward. The new PCB logo also doesn't show individuality as has already been discussed. The logo is again much like Oxford's, as is the new website. Of course as was presumed, this livery is the work of Ray Stenning and his team, and this is why the livery can also be linked to Trent Barton's Red Arrow livery seen on its coach service from Chesterfield to Nottingham.


Another point many people have raised is that there is now no room for advertising by other companies, unless they opt for an all over wrap of the livery. A potential loss in revenue here which we hope won't be passed on to the customers. Another thing I picked up on was the complexity of the livery. If a panel was to be damaged and was in need of replacement, it would be much harder to match up with the rest of the bus, and if left unpainted, would completely spoil the lines of the livery. The livery though smart now, could begin to look tired and 'battered' very easily. The 'old' livery, though simple, suits the lines of every bus in the fleet, and leaves it very easy for panel replacement and retains plenty of room for advertising. It is also quite a traditional and basic livery, and I must admit, I do favor this! 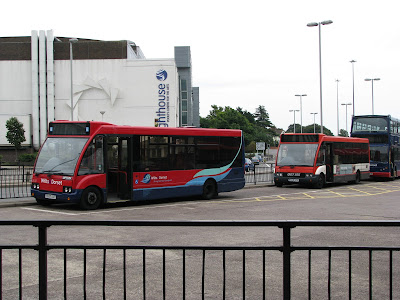 The particular example I am referring to in this case will be Go Ahead's Wilts and Dorset livery. The old livery was very smart, with clean cut lines, and retained some traditional values. The new livery seems a bit drab, and messy and personally I've never liked it. Again we see the use of a similar shade of red though thankfully it is less intrusive on the natural lines of the bodywork, particularly on the Solo. The two liveries can easily be compared with this photo I took during the transition period in 2008.


Its certainly a heated topic, but we shall see how the livery matures over time, and how it will look on other members of the fleet! Its a shame that none of the Step Darts or 709s will make it into the livery (At least I highly doubt it!), but at least like Birmingham did with the MCW Metrobus, we will easily be able to distinguish between a low floor and a high floor bus, ensuring passengers could easily identify if they would be able to use a service before flagging it down or attempting to board. Yay, I've found a positive note to end on!


*Addition* - An anonymous contributor has brought to my attention that Ray Stenning designed this livery for Carousel a few years back. I really don't think you could get much closer between the two if you tried! I couldn't have put this any better though. "Make the transitional line between the two reds more "swoopy", change the naff slogan and slap on
the currently in fashion "lifestyle" vinyl. Must have been about an hours work for him."
FOR PHOTO CLICK HERE
Posted by Laurence Mayhew at 22:42

IMHO, the new livery most closely resembles Mr Stenning's design for Carousel Buses from a few years back..

Make the transitional line between the two reds more "swoopy", change the naff slogan and slap on the currently in fashion "lifestyle" vinyl. Must have been about an hours work for him..

Bloomin hell! Well spotted! Its pretty much a copy and paste isn't it! You couldn't get much more similar than that if you tried. Thanks very much for bringing it to our attention.

It is such a shame that Go-Ahead have not wanted to keep the individual feel of Plymouth CityBus. I know some commentators on other sites have hinted that the old livery was too “municipal”. I think it had simplicity and was somehow a more pleasing overall effect and certainly a Plymouth CityBus was always recognisable even when the logo’s etc had been removed. This new livery is certainly smart but for me is over complicated and yet also a bit bland.

The new livery is fantastic altohugh it is simular to to OBC it looks great and modern i am pleased with it and out of all the liveries in plymouth it would come a joint 1st with Western greyhound.

There is nothing wrong with this livery, its better than the all over red with a white swipe. Besides Go-Ahead advertising could easily have been removed and replaced with other companies!