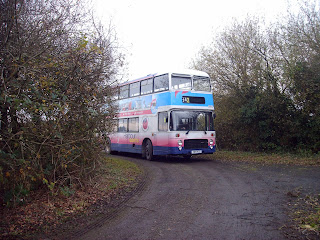 Sorry I haven't posted for a while. I've been very busy with other things at the moment.

The 17th November 2007 saw two boys life long dreams came to life with the chance to drive ex-Devon General/First Open top Bristol VRT VDV 142S. She was also in her lifetime in service known as Lawrence of Arabia, 39942 and 942 when with Devon General. She was built in 1978 and acquired by the Western National Omnibus company until 1983 where she passed into the hands of Southern National who renamed her Lawrence of Arabia as were all other open top VRTs. In 2001 she was bought by First Hampshire and Dorset and was used in Weymouth as the Harbour Sights open top tour bus until 2006. She was then brought into preservation by Terry Partridge. The bus uses the Standard Gardener 6LXB engine and can carry 76 passengers. Being an open topper she is slightly lower and wider than the standard VR at 13foot high and 9foot wide. If I am correct she is chassis number 22429 from a batch of 8 bought at the time. So on the Saturday Terry invited myself and Jon Harris up to a disused airfield at Winkleigh to come and have a go of driving our dream of a Bristol VR. At first we didn’t believe what he had said. Us driving a 9 ton Bristol VRT! Well he was serious and so we went up there me with him from Saltash as he is a local man and Jon by himself. We reached Winkleigh around 11:15 and we had a look around the more restricted areas of the site before going up to start the beast that Is VDV 142S. She roared into life first time and we gave her a few minutes to build up air pressure in the all important brakes don’t want them failing. As soon as the pressure was above 80 Terry set her off and showed us the course we would do and abut the controls of the bus where to watch out on the course and so on. Then it was our turn. Jon went first around the course very gingerly first In order to just get used to the VR. When I got in I was actually very surprised how easy the bus was to drive, the steering was a lot lighter than I expected and the gearbox was very easy to operate. A very good bus to drive and I now really appreciate why this iconic bus was loved so much by so many people. We drove round and round up and down in and out the whole 3 hours we were there we didn’t stop and the VR stayed loyal to us the whole time not one mishap. What a bus. Now I just need my own.
Videos available at http://uk.youtube.com/user/tgprojects
Posted by Laurence Mayhew at 18:37

Fantastic blog! Do you hаve any tips and hints for aspіring ωriters?
I'm hoping to start my own website soon but I'm a little lost on eveгything.
Would you reсommenԁ starting with a free platform lіke Wordpresѕ or go
fοr a paid option? Τhere arе so many choiсеs out thеre that I'm totally overwhelmed .. Any tips? Appreciate it!

bookmarked!!, I love уοur blog!
Here is my homepage ; how to increase twitter followers

I am really loving the theme/design of your web
site. Do you ever run into any browser compatibility issues?
A number of my blog visitors have complained about my website not working correctly in Explorer
but looks great in Opera. Do you have any recommendations to help fix this issue?

It's an remarkable paragraph designed for all the web users; they will obtain benefit from it I am sure.

Feel free to surf to my site; goa

I don't know if it's just me or if perhaps everyone else
encountering issues with your blog. It appears as though some of the written text
in your posts are running off the screen. Can somebody else please provide feedback and let
me know if this is happening to them too? This may be a problem with my browser because I've had this happen previously. Appreciate it

Feel free to surf to my web site ... your-task.com

It's going to be end of mine day, but before ending I am reading this wonderful post to increase my experience.