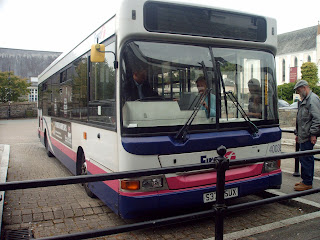 Lately with the timetable change and improved frequency of the 83 has been causing major confusion for the commuters of the route. On Tuesday the driver had on the blind 83 but then changed to an 86 therefore went towards the railway station meaning commuters to Devonport had to walk from the railway station mainly to Devonport High School For Boys as that was the popular school route. This also means 86 goes into Derriford "An uneeded journey" says Danial Chalinor as no body got off or on. He says that this should be left to travelers on the 83 not the 86. Then on Wednesday the bus did not arrive to pick the boys up until 5:30 some 30 minuites late meaning some very un happy pupils and parents. They say with all this new rebranding and more frequent buses has acctually made the route less reliable.
Posted by Laurence Mayhew at 21:50